The month of Ramadan saw a significant increase in the number of threats made by jihadist organizations, especially the Islamic State, to attack western countries. At the same time, there was also a rise in the number of terrorist attacks that were carried out in the field and their level of cruelty, such as the three attacks that were carried out in Saudi Arabia in the beginning of July 2016. The popular encrypted chat software, Telegram, serves as a rather convenient platform for jihadist organizations’ propaganda and psychological warfare against the West.

On July 6, 2016, the Jihadist Web Site Monitoring Group (JWMG) of the International Institute for Counter-Terrorism at the IDC Herzliya discovered a re-distribution of threats by IS supporters to attack targets in Germany, especially in Berlin. The threats were published on the Telegram channel, “Orlando Channel – Omar Mateen” and was designed to encourage Muslims living in the West to show initiative and carry out individual attacks, or what is referred to in jihadist terminology as “lone wolf” jihad. The channel itself was opened shortly after the terrorist attack in Orlando, which was carried out on June 12, 2016 against the LGBT community by a Muslim American citizen who swore allegiance to the Islamic State. 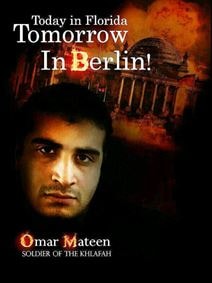 After the attack in Orlando (on June 14, 2016), Islamic State supporters threatened to recreate the success of the Orlando attack in other targets, including Germany, as stated on one of its banners (see photo): “Today in Florida, Tomorrow in Berlin”. This banner was re-distributed on July 6, 2016 on the above-mentioned Telegram channel, which even substituted his picture in the banner in order to illustrate the extent of the threat. It should be noted that IS supporters in Germany made a similar threat to attack the Pride Parade in Toronto (see poster).[1] 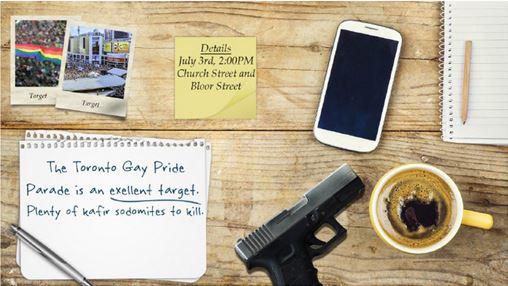 The banner that was published on Telegram and on social networks, threatening participants in the Pride Parade in Toronto

The JWMG team estimates that the re-distribution of the threats were likely tied to the LGBT Pride festival that is supposed to take place in Berlin on July 16-17, 2016. The festival is attended by 400,000 visitors each year.[2] It is possible that the attack in Orlando and the recent threats to attack Berlin indicate a new trend among Islamic State operatives to focus on the LGBT community as a target for attacks.