The Saudi regime and the Wahhabi religious establishment in Saudi Arabia have been perceived in the eyes of Global Jihad activists, already since the end of the last century, as illegitimate entities that ingratiate themselves to the West (in particular the United States). They are viewed as responsible for pervasive Western influence in Muslim lands and the subsequent destruction of the Muslim identity. Saudi control over Islam’s two holiest religious sites, Mecca and Medina, fuels the determination of jihad fighters to concentrate their efforts of liberating those sites from the grip of the Saudi regime. The establishment of Najd Province by the Islamic State in 2015, on the border of Saudi Arabia, indicates an intention to focus efforts on increasing terror attacks in the Saudi kingdom’s territory, as was demonstrated with several terror attacks carried out by members of the organization against the Shi’ite minority during 2015.

Last week there was a significant increase in the rhetoric of ISIS activists in social media networks, against the Saudi regime, due to the execution of dozens of jihad fighters. Among them was a Saudi scholar of religious law, Sheikh Fares bin Ahmad Aal al-Shuwail al-Zaharani, who was killed at the beginning of January 2016. Sheikh al-Zaharani was a prominent Al-Qaeda ideologist responsible for the mental radicalization of young Saudis. This discourse is characterized by demonization of the Saudi regime, by attempts to recruit Saudi civilians into the ranks of the Islamic State, and by urging them to carry out attacks against Saudi kingdom institutions. Speeches made by the organization’s leader, Sheikh Abu Bakr al-Baghdadi, and the organization’s spokesman, Sheikh Abu Muhammad al-Adnani, about the importance of investing efforts in liberating Mecca and Medina were frequently posted in social media networks.

On December 31, 2015, Islamic State activists posted to Twitter a hashtag called “Saudi Arabia executes the honest and righteous religious scholars” (#????????_????_???????_?????????). Under this hashtag, threats about harming a number of Saudi security and royal figures were posted, and photographs of the people targeted were also posted, along with their names and addresses. Other activists posted banners (see the image below) and called upon Saudi civilians to rebel against the Saudi regime and to thereby eradicate the “disease” spreading through the country through use of weapons, knives, Molotov cocktails, etc. One fighter published a video depicting two Saudi civilians traveling in a car with weapons at their sides. They state that they are on their way to carry out a terror attack, in retaliation for the executions.[1] The Al-Battar media institution, affiliated with the Islamic State, expressed sorrow and outrage over the executions, especially of another Saudi scholar who supported global jihad. The author of the statement, Hamid bin Abdallah bin Ibrahim al-Hamidi, vowed that revenge would be taken against the Saudi regime.[2] 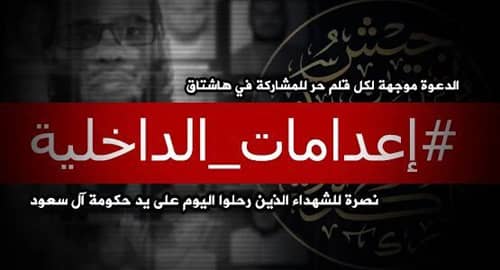 Another hashtag published on January 2, 2016, titled “On the Side of the Saudi Ministry of Internal Security” (#???????_????????), this time by supporters of Al-Qaeda, also focused on a call for revenge attacks against the Saudi regime and suggested how to implement them. A post from Al-Qaeda in the Arabian Peninsula under this hashtag also threatened the Saudi regime, on December 1, 2015, that if the latter executed prisoners affiliated with global jihad, it would suffer a hard blow.[3] After the execution, the Abdullah Azzam Brigades, identifying with Al-Qaeda and active in Syrian and Lebanese territories, called for the Saudi kingdom civilians to join in jihad combat against the Saudi regime and to assist the mujahideen.[4]

In conclusion, it is apparent that jihad fighters, both from Al-Qaeda and from the Islamic State, are extremely determined to implement major attacks of revenge against the Saudi regime, due to the latter’s execution of dozens of jihad fighters in the beginning of 2016. 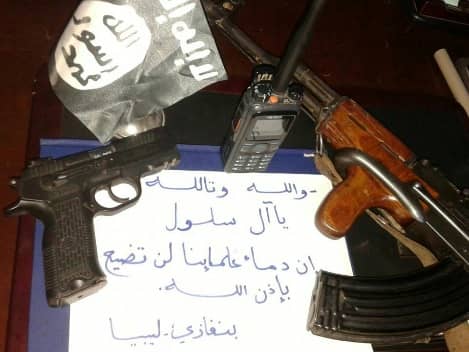 The discourse itself is intended to encourage Saudi civilians to respond, and to recruit Saudi civilians into both organizations. Yet the two aforementioned hashtags reflect another expression of the rivalry between Al-Qaeda and the Islamic State in the virtual arena, and the efforts of each to present themselves as the leaders and true protectors of the Muslim people in general, and specifically from the injustices committed by the Saudi regime against its subjects.