Al-Sumud is an Arabic language magazine published by the Taliban in Afghanistan, which covers the…

Al-Sumud is an Arabic language magazine published by the Taliban in Afghanistan, which covers the jihad objectives in the Afghan arena. The organization, which is also called the “Islamic Emirate of Afghanistan”, is an Islamic jihad Sunni organization first active in Afghanistan in 1994, after the fall off the Soviet regime in that country. Initially, the organization was for the most part comprised of students pursuing Islamic Studies, and thus the new name “Taliban” – literally meaning “students”. The organization ruled in Afghanistan from 1996 to 2001, when the United States entered Afghanistan after the September 11 attacks. Today, the organization is headed by Mawlawi Haibatullah Akhundzada, appointed as leader in May 2016 after the death of the previous leader, Mullah Akhtar Mansour – who was killed by an American drone. Today the organization’s activities focus on two areas: terror attacks against foreign forces in the country and against the Afghan government, and conquest of Afghan lands and the implementation of Sharia law in the occupied regions.

The Al-Sumud magazine was first published in 2006, and has been printed every month since then. Every issue contains an average of 44 pages. In April 2015 the magazine entered its eleventh year. The name of the magazine comes from the Arabic word “al-Sumud”, which means “standing firm”. The magazine was founded by Sa’ada Nasiruddin, better known as “Herawi” – who was close with Mullah Omar and was one of the more prominent Taliban activists at the beginning of 2008. According to reports, he used an alias because he was on the United States “Most Wanted” list. The purpose of the magazine was to publish interviews with the organization’s officials, reports on uprisings, and news about events in Afghanistan. The articles was written in very simple Arabic, probably since it was the second language of the editors. Most of the articles in the magazine were authored by a number of steady writers, who also used pen names.

The magazine can be divided into a number of central themes, such as those found in the February, March, and April 2016 editions:

1. Official statements by the Afghan Taliban 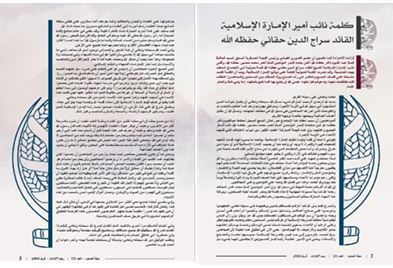 A message from the deputy leader of the Taliban, Sirajuddin Haqqani

2. Interviews with senior jihad activists in the organization

The second part of the magazine usually includes an interview with one of the senior jihad activists in the organization, from different provinces in Afghanistan, describing the victories of jihad activists in each area and the unity of the forces. Every interview concludes with a call for jihad.

3. Promoting the Myth of the Shaheed – Martyr

In every issue of the magazine there is a column called “Our Heroic Martyrs”, which describes the activity of different shaheeds who acted on behalf of the organization. Some of the shaheeds featured died in battle, such as Faisal Allah Salim, who was killed by an American drone in November 2015[3]. Other shaheeds featured were jihad fighters who had once been affiliated with the organization, and who died of various illnesses, such as Mullah Hassan Rahmani, who was a member of the organization’s financial council, and who died of an illness in February 2016.[4] 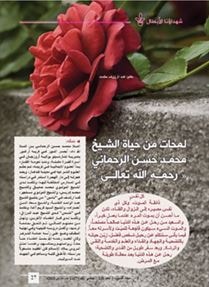 4. Teaching about Jihad and the Traits of the Mujahedeen 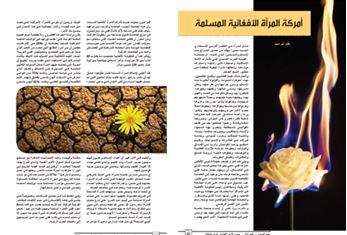 An article about the Americanization of Afghan Muslim women

7. Reactions to the Syrian Arena

The magazine targets mainly Muslims who are not Afghans, and who support the Islamic goals.

According to the Afghan Taliban’s official website, the magazine is the only voice that publicizes in Arabic what is happening in Afghanistan, for the benefit of Muslims throughout the Arab world. The site adds that the magazine originated in Afghanistan in order to make the voices of Muslims persecuted by the apostates heard. The purpose of the magazine it to bring the truth to millions of Muslims outside of Afghanistan who are interested in the reality of what is occurring in that country, aside from the lies publicized by the enemy.[17]

The magazine encourages its readers to stay in touch. An email address appears on the first page, so that readers can make contact with the magazine. In addition, the magazine’s website address is also provided, as well as its Twitter account.

The Al-Sumud magazine was first published on a monthly basis in 2006 by the Afghan Taliban organization, and in April 2016 entered its eleventh year of publication. The magazine is printed in Arabic, and is specifically directed towards non-Afghan Muslims throughout the Arab world. The goal of the magazine, according to its writers, is to present to its readers “the true picture” of what is happening in Afghanistan – in contrast to what they are exposed to via other media sources which take the side of the organization’s opponents. In light of that, every issue also provides a summary of the “crimes” committed by foreign forces against the residents of Afghanistan, and the activities the organization’s members took part in during the month each issue is published.

With regard to the topics covered, the magazine primarily provides material that promotes the ideas and ideology of the organization (interviews with senior activists, and attacks on American policy, and Western values), and less on strategic matters. In addition, the magazine publishes no articles describing how jihad is carried out, but rather focuses on the type of religious lifestyle the mujahad is expected to adopt.

As mentioned above, the magazine also encourages its readers to maintain contact with the writers via an email address appearing on the first page of the magazine. The magazine’s internet site is provided as well.