During the past year, evidence has mounted both on jihadist Web forums and in the…

During the past year, evidence has mounted both on jihadist Web forums and in the Arab press that foreign Islamist fighters have entered Syria expressly to join the fighting against the Syrian regime. The growth of this trend is due largely to Al-Qaeda’s desire to turn Syria into an arena of jihad, not only to overthrow yet another tyrannical infidel regime, as this is conceived in the context of the struggle against the “near enemy”, but also to enhance Al-Qaeda’s standing as powerful and able to defend Sunni Muslims in blighted places like Syria – and to parlay this standing into a tool for recruiting even more adherents to its ideology.

Since early 2012, Al-Qaeda leader Sheikh Ayman Al-Zawahiri has released several video clips in which he makes an emotional appeal to Muslims everywhere to come to the aid of the Syrian people in their struggle against the regime. On February 12, 2012, Al-Zawahiri called on Muslims in Turkey, Iraq, Lebanon and Jordan to aid the Syrian rebels, on whom he lavished praise.i On September 13, 2012, Al-Zawahiri again asked the Muslim Nation to support the mujahideen wherever they are, and especially in Iraq and Al-Sham [Greater Syria]. He further stressed that the liberation of Syria, and its transformation into an Islamic state, would make it a bridge to the conquest of Jerusalem and the intimidation of Israel.ii On October 25, 2012, Al-Zawahiri reiterated that Damascus and, this time, Cairo too were a springboard to the conquest of Jerusalem. He made certain to stress the importance of the participation of Muslims from around the world in jihad against the regime of Bashar Al-Assad, and expressed his support for the continued, justified struggle of the Syrian people.iii 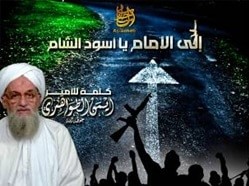 “Onward, Lions of Al-Sham” is the title of the video clip issued by Ayman Al-Zawahiri on September 12, 2012

It is thus possible to understand the increasing influx of foreign Islamist fighters into Syria from neighboring, and even distant, countries as a response to the exhortations of Al-Zawahiri. To grasp the dimensions of this phenomenon, one need only refer to a report published in the Syrian daily Al-Watan on November 27, 2012, containing a long and detailed list of the terrorists from Arab and non-Arab Muslim countries who were killed in Syria during October and early November 2012.iv The list includes the names of 142 terrorists from 18 different countries, the dates of their death, and where they were killed. According to the report, the majority of these terrorists belonged to Al-Qaeda or joined it upon reaching Syria. Most of them had infiltrated Syria from Turkey, although a few of them had entered via northern Lebanon. Heading the list, most notably, were Islamist fighters from Saudi Arabia. The following is a tally of the details listed in Al-Watan: among the Arab Muslims, 47 Saudis, 24 Libyans, 10 Tunisians, 9 Egyptians, 6 Qataris, and 5 Lebanese and, among the non-Arab Muslims, 11 Afghanis, 5 Turks, 3 Chechens, one Uzbekistani, and one Chadian. Most of these terrorists were killed in the provinces of Aleppo, Homs, Idlib, Dayr Al-Zawr, and Al-Hasakah.v

The extent of this phenomenon was also revealed by an investigative report titled, “Al-Sham…Land of the Vanishing Caliphate”, which was prepared for Algeria’s Echorouk TV in November 2012 by a journalist named Yasin bin Rabi’a. This report followed foreign Islamist fighters who had come to Syria and, for the most part, joined the ranks of the Al-Nusra Front, which was officially established in early 2012 and is identified with Al-Qaeda.vi It is worth noting the participation of jihadist commanders from Chechnya in the Al-Nusra Front’s military operations against Syrian security forces. For example, on October 12-13, 2012, the Al-Nusra Front, together with Islamic Al-Fajr, a Salafi-jihadist movement led by Syrian exile Sheikh Abu Basir Al-Tartusi, captured Syrian Army Missile Base 606 near Aleppo. The conquest of the base received media coverage by the Al-Jazeera News Network.vii Evidence also exists that Salafi-jihadists are arriving in Syria from Jordan. In fact, Sheikh Abu Muhammad Al-Tahawi, a prominent Jordanian Salafi-jihadist, declared as early as March 2012 that the commandment of jihad against the Syrian regime is an individual obligation incumbent on every Muslim, as is the obligation to assist the Al-Nusra Front in its struggle.viii On one occasion, Al-Tahawi bemoaned the Jordanian authorities’ prevention of Salafi-jihadists from crossing the border into Syria.ix In early October 2012, the Jordanian daily Al-Sabil reported the death of Al-Tahawi’s son-in-law, Mahmoud Al-‘Aal, in a battle against Syrian Army forces, which he had led along with a Salafi-jihadist sheikh from Irbid, Jordan.x 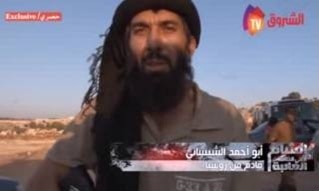 From an investigative report prepared for Echourouk TV, showing Abu Ahmad Al-Shishani, a Russian come to fight in Syria

This and other evidence indicates the increasing focus of global jihad on the Syrian arena. Ayman Al-Zawahir’s incessant, repeated calls for the Muslim Nation to join jihad against the Syrian regime and aid the Syrian people are being answered – in effect, his directives are being implemented in the field. This provides generous proof of his substantial, abiding influence in jihadist circles. In addition, it is interesting to discover the significant response to his exhortations by residents of Saudi Arabia – a response that should give all relevant parties pause. 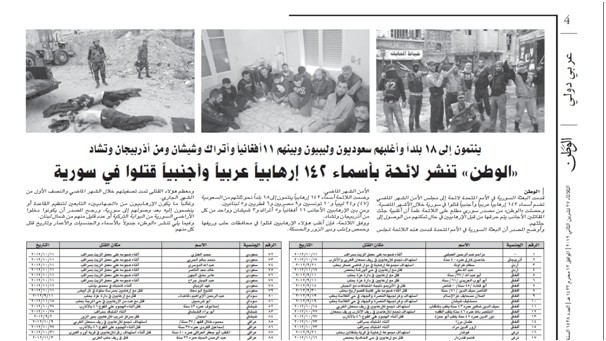