On December 4, 2015 the leader of Al-Qaeda in the Islamic Maghreb (AQIM), Abd al-Malik…

On December 4, 2015 the leader of Al-Qaeda in the Islamic Maghreb (AQIM), Abd al-Malik Droukdel Abu Musab Abd al-Wudud, announced that the Al-Murabitoun organization, headed by Sheikh Mokhtar Belmokhtar, was joining the AQIM: “We hereby inform the Islam Nation that the lions of Islam and heros of the struggle from the Al-Murabitoun Brigade are joining Al-Qaeda in the Islamic Maghreb.” The Al-Murabitoun spokesman, Abu Dujana al-Qasmi, verified the announcement and explained that the unification was intended to maintain unity in the ranks, and prevent division among the mujahideen: “Our merger with our  brothers and beloved in the Al-Qaeda in the Islamic Maghreb organization was done with the intention of preserving a strong, united stance in the face of the occupying Crusador enemy,” and warned that a war between brothers among jihad fighters would lead to their destruction, and would do service to the Crusader enemy.[1]

This merger, in fact, indicated the end of a deep split and division between the two organizations, that had lasted for several years. At the same time, this development raises the question: Is the unification is a sign of an increase in power for Al-Qaeda in the Islamic Maghreb, or rather evidence of distress within the organization’s ranks?

Al-Murabitoun was founded in the middle of 2013, as a result of the merger of two jihadist groups in North Africa: “The veiled ones” (Al-Mulathimun) or “Signed in blood”, and the Movement of Oneness and Jihad in West Africa – MOJWA. These two organization split off from the parent organization, Al-Qaeda in the Islamic Maghreb, against the backdrop of personal conflicts with Droukdel, issues of status, and a desire to lead an independent jihad organization with connections to Al-Qaeda in Afghanistan.[2] 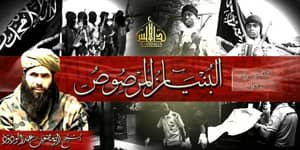 Several possible considerations can be identified as the basis for the decision to unite Al-Murabitoun with Al-Qaeda in the Islamic Maghreb. First of all, it may have been a attempt to slow down the influence of the Islamic state in the region, as it had become a tangible threat to the Al-Qaeda’s interests. Distinct evidence of the increasing influence of the former is discernible in the pledge of allegiance made by Adnan Abu Walid al-Sahrawi, a senior leader in Al-Murabitoun, in May of this year to Abu Bakr al-Baghdadi, and in his call for more jihad fighters to follow his example. Belmokhtar  denounced the pledge of allegiance, and emphasized that it only represented al-Sahrawi and “The Movement for Unity and Jihad in West Africa”, and not the Al-Murabitoun organization.[3] This indicates an increasing concern that jihad activists will join the Islamic State, at the expense of Al-Qaeda, and therefore the unification was intended to prevent a flow in that direction. Second, it may be that Belmokhtar agreed to the unification after receiving an explicit promise from Droukdel that he would be appointed to a senior position in the parent organization, and maybe even as a potential heir to Droukdel, and thereby smooth things over after years of hatred. Third, a desire to increase the drawing power of the organization for additional jihadist fighters in the region and to thereby enable a broader range of terror attacks. Fourth, an opportunity for reinforcing the campaign of treaties with the tribes in the Sahal area, and creating Strategic Depth which will permit more freedom of movement, weapons smuggling, and refuge areas. 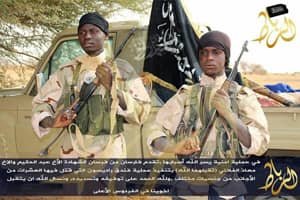 A photograph published by Al-Murabitoun on social media sites in December this year, featuring two of its members who carried out a terror attack at the Radisson Hotel

In any event, the unification between the two organizations is not good news for the countries in the region, and in particular Mali, which suffer at any rate from deteriorating security. On November 22, 2015 Al-Qaeda in the Islamic Maghreb and Al-Murabitoun claimed responsibility for a serious terror attack carried out by their fighters against foreigners in the Radisson Hotel, in Bamako, the capital city of Mali. Droukdel emphasized that this attack was an important milestone that signified that start of cooperation between the two organizations. He even threatened that there would be terror attacks targeting the French, and promised they would pay a heavy price on French territory and outside of it, due to the French government’s crimes against Muslims. In addition, he promised to free the organization’s members being held in prisons.[4]

The fact that more jihadist fighters are joining Al-Qaeda in the Islamic Maghreb, the solidification of the campaign of treaties with the tribes in the Sahal area as a result of the unification, and the conflicts with the Islamic State are more than likely liable to spur Al-Qaeda to carry out additional terror attacks, in an effort to promote itself as the most dominant terror organization in the region.

[2] In October 2012, Al-Murabitoun broke off from Al-Qaeda in the Islamic Maghreb and announced it was establishing a jihadist organization called “The veiled ones”. That was after Droukdel decided to  appoint Yahya Abu al-Hammam as the head of the Sahara Emirate, replacing Belmokhtar. The Movement for Unity and Jihad in West Africa was established in 2011 as a result of the refusal of its members to set up a special branch composed of Arab fighters.