In Mid-October 2016, Kurdish Peshmerga forces and Shi’ite militias launched a campaign to eradicate the…

In Mid-October 2016, Kurdish Peshmerga forces and Shi’ite militias launched a campaign to eradicate the Islamic State from its stronghold in Mosul, in Iraq, with American backup. On the surface, it seems that the organization is experiencing strategic distress in light of its territorial losses in Syrian and Iraq. Moreover, the advancement of forces towards Mosul threatens the future of the caliphate that the organization established, as well as its prestige. Nevertheless, the organization’s well-oiled propaganda machine continues to publish materials that present the organization as a strong, united force that continues to steadily attain victories over its enemies in the battlefield. The aim of the publications is to strengthen the morale of the fighters in the field and to create demoralization among the ranks of its enemies. Al-Bayan radio station, which was established by the organization in April 2014, publishes daily reports (in PDF or DOC format) about the battles fought by IS fighters against enemy forces, including reports about the destruction of vehicles, killing of enemy soldiers, capture of territory, and more. The reports themselves are published on various platforms, including jihadist Web forums such as Shumukh al-Islam, blogs and even sharing sites in the West. The American site, “archive”, a file storage service, is a prominent platform for the distribution of the organization’s messages. A Web user named [email protected] (see photo) posts daily reports to the “archive” site about the organization’s successes in the field.

From left to right: an IS supporter’s account on the “archive” Web site, through which he feeds the organization’s propaganda material; the banner page of the daily report published by Al-Bayan radio

In addition to the radio, the various Islamic State provinces in Iraq and Syria are concentrating efforts on publishing videos and photos from the battlefield. For example, on November 9, 2016, the Islamic State in Nineveh Province (where Mosul is located) published photos of ambushes set by its fighters and their launch of rockets at the Iraqi army. The Islamic State in Hamat Province published a collection of photos documenting the digging of tunnels to be used by the organization’s fighters on the crucial day.  The Amaq news agency and Al-Nabai magazine, which belong to the organization, also publish reports regarding battles, such as suicide attacks, etc.

From left to right: the launching of rockets at Iraqi army forces in Mosul, Iraq; the digging of tunnels in Hamat, Syria

A graph by the Amaq news agency containing details about the second week of battle in Mosul, including 18 suicide attacks, 437 killed

There is also extensive propaganda activity by the organization on social networks despite the battle in Mosul. The Afaq media group, which helps the Islamic State raise awareness about safe and secure Internet use, published several graphs on its Telegram account regarding the organization’s activities on social networks. According to Agaq, in October 2016 alone, 5,994 accounts (see graph) were opened, including 732 on Facebook, 5,162 on Twitter, 100 on Telegram, and 50 virtual telephone numbers to be used in order to open fictitious accounts on social networks. This demonstrated a 25% increase from September in the use of social networks. In addition to these graphs, the group announced that it intends to concentrate significant efforts on the wide distribution of the organization’s propaganda materials in light of the Twitter administration’s systematic removal of IS supporters’ accounts. To this end, it offered several tips on how to outfox the Twitter management and continue to publish propaganda materials, and it recommended that IS supporters join the group’s efforts to distribute materials on social networks. 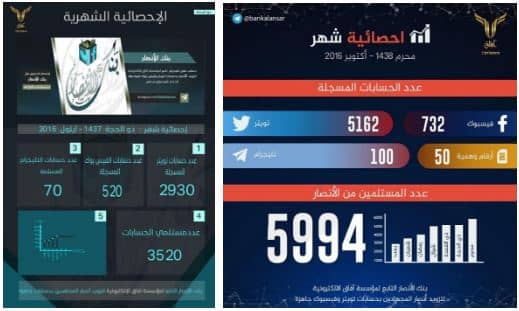 From left to right: Graphs regarding the organization’s activities on social networks during September and October 2016, respectively

For now, the Islamic State in Iraq and Syria, as well as in its other provinces, continues to distribute propaganda materials that characterize its fighters as having the upper hand in the battle. It should be noted that the organization also attributes considerable importance to the conceptual aspect of the battle and, for this reason, insists on displaying a presence and visibility on social networks.