The Telegram application has been commonly used by global jihadist elements since the end of 2015 due to its encryption and secure use, and in light of the increased closure of jihadist accounts on Twitter and Facebook. Telegram serves as a central platform for imparting and disseminating the ideology of terrorist organizations, managing propaganda and psychological warfare, creating an online arena for the sharing of information and the exchange of ideas on various topics, such as religious legal, public and cyber issues, and more. The “Bot Mujahideen” Telegram Channel, which is closely associated with Jabhat Fateh al-Sham (formerly Al-Nusra Front), stands out in this context in light of its role as a centralized online interface that provides information on a wide range of topics for jihad fighters in Syria.

The “Bot Mujahideen” Telegram Channel defines itself as “a collective military jihad program on the Telegram social network that adheres to the path of the Sunnah and jihad”. It emphasizes that it is not identified with any organization but the correspondence published on the channel clearly indicates its support for Jabhat Fateh al-Sham and other jihad factions tied to Jaysh al-Fatah, an umbrella organization composed of several Islamist jihadist factions in Syria. For example, members of the channel welcomed the establishment of the new umbrella organization, “Hay’at Tahrir al Sham”, which was established on January 28, 2017 as a new merger of five jihadist organizations, including Jabhat Fateh al-Sham. According to the channel, its content is meant to assist jihad fighters in Syria: “Bot [Mujahideen] is a complete jihadist library. It is composed of unique groups supervised by mujahideen and experts in their fields”.[1] 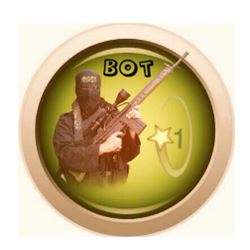 The logo of the “Bot Mujahideen” Telegram channel

The Bot Mujahideen Telegram channel controls several other Telegram channels, referred to as “rooms”, which are affiliated with it. Each room is dedicated to a different issue and has over 1,000 members. The “Military Sciences room” (‘Ulum ‘Askariyya), for example, focuses on the study and operation of various weapons, defense against aircraft shootings, the study and assembly of explosive devices, and other military topics. Another room called the “The Public Market of the Brothers” (inaugurated on November 7, 2016) “is considered a market for the sale and purchase of weapons between mujahideen brothers” in Syria. Various weapons can be found for sale in the room, including Kalashnikov rifles, silencers, RPG’s, rifle scopes and shoulder missiles (MANPAD), for sums ranging from several tens to thousands of dollars. For example, a jihad fighter in Idlib (northern Syria) posted a Czech pistol for sale for $425 (see photo).[2] Other rooms (some are no longer active) are dedicated to air defense, fighting tactics, defense from electronic breaches, and more. It is interesting to note that a hacker group named “Electronic Jihad Army” (Jaysh al-Jihad al-Electroni), which focuses on breaches of Shi’ite Telegram accounts, also serves the Telegram channel. On January 27, 2017 a new “room” called the “Network Mujahideen Newsletter” was opened for the purpose of reporting on events that take place in the arena of jihad in Syria.

It seems that the “Bot Mujahideen” Telegram channel and the many “rooms” that it operates are fulfilling an important role in the online publicity campaign by jihadists in Syria, and are trying to leverage the channel as a main source of information for them. In effect, it is a virtual arena of jihad that must be considered and tools must be found for coping with it. 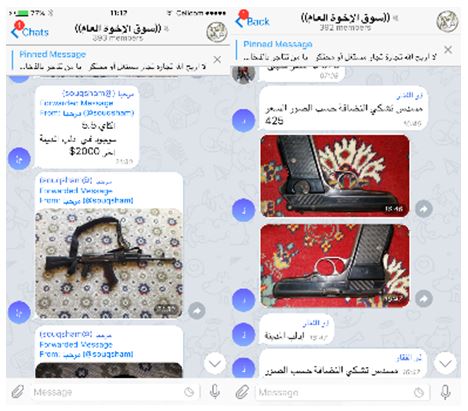 From left to right: a Kalashnikov rifle worth $2,000 in the “Public Market of Brothers” room;

The logos of several rooms belonging to the “Bot Mujahideen” Telegram channel: