Islamist terrorist organizations, such as Al-Qaeda and the Islamic State, show a great interest in…

Islamist terrorist organizations, such as Al-Qaeda and the Islamic State, show a great interest in cyberspace an important and central tool in increasing their technological capabilities and as another arena of activity in their war against the West. These organizations are undergoing a constant learning process characterized by their attempt to find tools in cyberspace to help them gather intelligence material concerning the enemy’s capabilities and to implement technological tools among their ranks. Since September 2015, we have witnessed a significant increase in the use of the Telegram software (software for sending encrypted instant messages) by the Islamic State and Al-Qaeda. In March 2016 alone, 700 new channels identified with the Islamic State were opened.

Until now, most jihadist terrorist organizations have launched official channels on Telegram, which serve as a platform for indoctrination characterized by the sending of messages, videos, audio clips, and more. In addition to these official channels, there are also unofficial channels that were established at the initiative of groups and individuals who support the Islamic State and Al-Qaeda. It is worth noting one channel called “Mujahideen Secrets” (Asrar al-Mujahideen), which asks users to provide information and tools for Muslims interested in becoming “lone wolves”, or individual terrorists. Both organizations encourage Muslims living in the West to carry out individual terrorist attacks in their home countries for several reasons, including their familiarity with the area and the local culture, their ability to assimilate into the host population, and the few costs required in planning and executing such attacks.

On the “Mujahideen Secrets” channel (the channel’s logo is composed of a wolf and a Kalashnikov rifle), a wide range of advice is offered for carrying out individual terrorist attacks. The banner of the channel states that it is “a special group that specializes in military training for lone wolves, the publication of military lessons by experts in the field of military training”. It also states that “the group is unique in that it only publishes jihadist military materials via the general management of the Mujahideen Secrets channel, and it allows the viewing of your questions regarding individual jihad through the sole email address, which is [email protected] […]”. For example, the channel recommended using skimmers in order to attack planes. According to the channel, simple skimmers can carry C4 explosive material weighing 300 grams “and they are sufficient to crash a plane on the airfield” (see photos). Other posts dealt with the importance of collecting intelligence from cyberspace about chemical weapons storage locations, in order to prepare the hacking infrastructure to steal the chemical weapons – to be used in future attacks. In addition, guidebooks were posted on how to build bombs from materials found at home.

In another post that was also spread on social networks, the writer addressed the ways in which one can protect himself from drones. After describing the structure and operation of a drone, several tips were posted: avoid gatherings in open places that are exposed to the air; use underground floors in order to avoid a drone missile strike; establish an intelligence network to deal with collaborators and spies who pass intelligence information to the enemy, resulting in drone attacks; use natural hiding places such as forests and caves; establish artificial hiding places by burning cars to create smokescreens in a certain location; avoid the use of wireless and mobile devices; and more.[1]

It should be noted that the channel was shut down on May 22, 2016, seemingly due to a report sent to Telegram about the use of the channel as a platform for the distribution of terrorist materials or due to concern on the part of the channel’s owners that their personal information would be exposed. On another Telegram channel called “Dabiq al-Khilafa”, a user named Abu Mus’ab al-Najadi, a supporter of the Islamic State, wrote that the above-mentioned channel was brought down by Shi’ite enemies of God, and he threatened that they would be punished for it. According to the user, it is forbidden to share the link to the channel, including the lessons published on it, so as not to expose the channel to attacks by the Shi’ites. It should be noted that the closure of Telegram channels that contain violent content is commonplace. Most of them are re-opened several days after being shut down under another address, and so it continues. 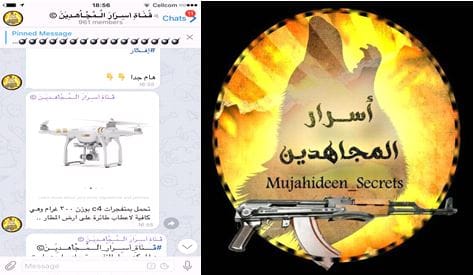 From left to right: a recommendation to use a skimmer in order to cause a plane crash;