According to reports arising from several Arabic online forums on the Internet, a new Palestinian…

According to reports arising from several Arabic online forums on the Internet, a new Palestinian global Jihad oriented group “Jahafil al-Tawhid wa-l-Jihad”[1] (The Unification and Jihad Legions) announced its inception, declaring the beginning of its operations in the Palestinian territories and especially in Gaza as of the beginning of November 2008. According to the first proclamation issued by the organization on its Arabic web site, the group claims to belong to Al-Qaeda by adopting the global Jihad ideology, practices and messages of bin-Laden and Ayman al-Zawahiri, claiming to continue the path of Abu Musab al-Zarqawi[2] and Abu Layth al-Libi[3]. The group has an online forum it claims to be its horn for messages propaganda and responsibility claims[4]. It should be noted that the groups’ poorly translated two messages into English, were probably initiated from an Arabic native speakers who intend to deliver their message to non-Arabic speakers and non-Muslims around the world to inform about its existence and objectives.

A poster of Abu Musab al-Zarqawi with the Al-Aqsa mosque in Jerusalem in the background. 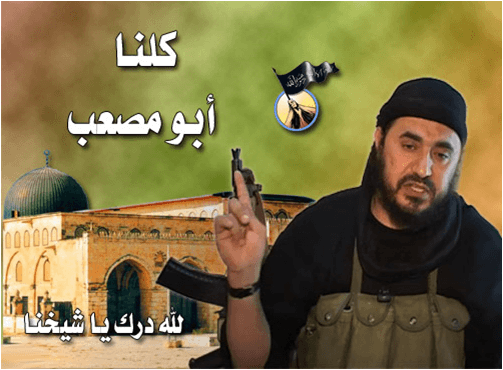 On its left the writing: “we are all Abu Musab“[5]

As indicated by its name and as it transpires from its first proclamation, this group wishes to employ Jihad as its own agenda in the framework of its war against the Jews and for the liberation of Jerusalem[6] and against any Muslim who wishes to establish any dialogue with them. It is very probable that the group points an accusatory finger toward the Hamas leadership in Gaza, who conducts any sort of dialogue with Israel.

On the online forum of the Fatah movement, the surfers has conducted an active discussion while referring to this group as a new Palestinian organization, who has adopted Al-Qaeda’s posture. One of the participants even claimed that he has heard of the arrest of a Muslim Sheikh in Rafah, belonging to this Jihad group. According to him, the Sheikh has sanctioned the killing of Ismael Haniya, Hamas Prime minister in Gaza, and the rest of the Hamas leadership in Gaza[7]. On the “Palestinian Islamic Jihad”(PIJ) blog, there were also references to this new Palestinian Jihad group, while posting derogatory note for example: “the group relies on quotes and copying from websites and forums in its proclamations, and its language is faulty, lacking and incomprehensible …”[8].

According to “Jahafil al-Tawhid wa-l-Jihad” second proclamation, the group has carried out its first terrorist attack against an Israeli target on November 5th 2008, when launching 3 mortars towards the Kisufim check point. According to the group, the attack was carried out in response to Israeli aggression and “crimes” against the Palestinians.

At this point its premature and difficult to assess as to what extent this group is really active (leadership, number of activists, training, physical spreading, logistics) or whether it’s a virtual cyberspace organization started a significant volume of online activities on the net. Nevertheless, it should be noted, that since Hamas’s complete take over in Gaza strip in summer 2007, a significant rise can be seen in the number of new self proclaimed Jihadi organizations in the Gaza strip, such as the “Jahafil al-Tawhid wa-l-Jihad” group. The penetration of global Jihad’s radical ideology into these organizations raises a deep concern that it may trickle over into large parts of the Palestinian population in Gaza, and bring further escalation.

Under Hamas’s rule in Gaza, organizations characterized as global Jihad began appearing and started carrying out attacks against western entities present and operating in the Gaza strip. Under the auspices of Hamas rule, since 2005 a new radical Islamic stream was established mainly composed by Hamas and Islamic Jihad operatives, disillusioned from the “pragmatic” conduct of Hamas, its deviation and betray from the path of Jihad. This radical entity bearing the Arabic Islamic name “Jaljalat”(Rolling thunder, peal)[9] is new pro Al Qaeda and global Jihad oriented compilation, operating in Gaza strip without any interference of the Hamas government, as a spearhead committed to maintain the “flame” of Jihad against Israel and to “purify” the Palestinian society from western presence and influence.

Radical Islamic organizations, which are identified with the “Jaljalat” conceptual perception bear Islamic names taken out from the Islamic narratives and myths repository which leaves no doubt of their global Jihad nature: “The Army of the believers-Al Qaeda in Palestine”,” The Army of Islam”,” The Mujahideen battalions”,” The Army of the Ummah-Jerusalem” “Fatah al-Islam in the Land of Ribat”, “Abu Rish Brigades – Sword of Islam”, “The Jerusalem Jihad Warriors movement” and others less known.

The radical global Jihad oriented groups in Gaza adopted idioms, motives used by other similar Jihadi groups identified or affiliated with Al Qaeda, for instance the utilization of “Thunder” (Jaljalat-Arabic) and lightning motives taken from the Islamic narratives and myths is based on the Qur’an[10]:

“He (God) it is who shows you the lightning for fear and hope (of rain); and He brings up heavy clouds, and the thunder celebrates His praise; and the angels, too, fear him, and He sends the thunder-clap and. overtakes there-with whom He will; yet they wrangle about God! But He is strong in might.”

Its use in the Jihadi context reflects elements of divine power, force revenge and overwhelming superiority of Jihad in the name of Allah. Images of lighting, tornadoes, and hurricanes suggest God’s power, wrath, and justice. Certain Jihadi groups may associate themselves with these symbols as a means to exaggerate their power and imply that they are acting on God’s will. Thus, by using these symbols, Jihadi groups are able to represent themselves and their cause as extensions of divine power. Jihadi groups often use these motives to demonize the suicide bombers phenomenon regarding to their supreme motivating and powers executed in the name and will of Allah. 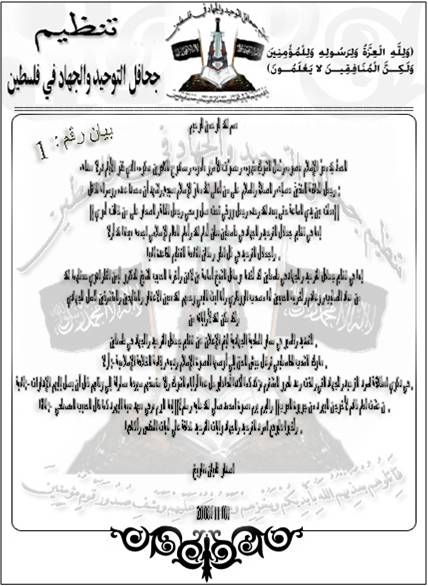 In the name of Allah the merciful and the beloved.

Praise the Lord who glorifies Islam, who humiliates the participation in its surrender, and who directs matters according to his orders, and deceives the infidels with its ruses…

We at the “Jahafil al-Tawhid wa-l-Jihad in Palestine” organization embrace the messages of Sheikh Osama bin Laden and his beloved nephew Sheikh Dr. Ayman al- Zawahiri, god save them from the workers of the cross and their protégées, and take into account the ways of our beloved (late) brothers Abu Musab al-Zarqawi and Abu Layth al-Libi, Allah’s mercy upon them, and the way of those longing and yearning for Jihad. Allah has acted to guide his awliyya (allies) and lead them in the path of Salafist Jihad so that the “Jahafil al-Tawhid wa-l-Jihad in Palestine” organization will declare:

a. Our best wishes to the Palestinian people for the entrance of the army of truth to their land in order to help Islam and its religion to establish the Islamic Caliphates.

b. In honor of the establishment day of the Unification and Jihad Legions which overlaps the day when the cursed Balfour Declaration was given, we emphasize as we have emphasized before that the allies of the enablers will leave us, and if they do not do so our drawn swords will reach their throats even before the warning reaches them.

c. We fulfill today the obligation of our Prophet towards the Jews, as said by the beloved and chosen one (Mohammad): “I wish I may live next year in order to take out the Jews from the Arab Peninsula”. And today is a day of victory for Mohammad, Allah’s prayer and peace be upon him.

Finally, the Unification and Jihad Legions will indeed hoist the flag of uniqueness, as they are knocking on the gates of Jerusalem and its surroundings. 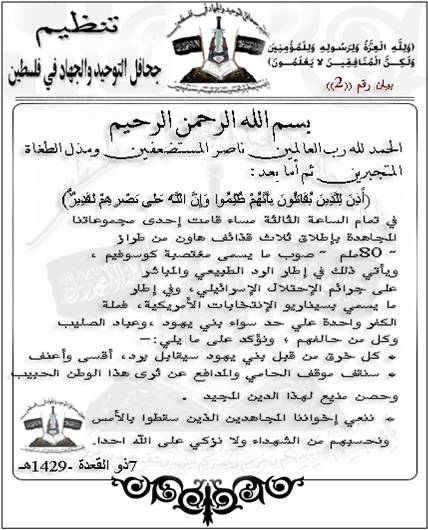 The Unification and Jihad Legions in Palestine.

In the name of Allah the merciful and the beloved. Praise be the Lord ruler of worlds helping the weak and humiliating the arrogant usurpers, and to the matter at hand:

“(to the believers) that war is being waged upon, the right to return the fight is given, because they are wronged. God may come to their aid”[12]. At exactly three o’clock at night one of our Jihad groups has launched 3 80 mm mortar bombs towards what is called the Kisufim settlement. The shooting was done in the framework of the natural and direct response for the crimes of the Israeli occupation within what is called the scenario of the American elections. The infidel sect is one and thus on the same basis the Sons of Judea (the Jews), the worshippers of the cross (the Christians) and whoever has an alliance with them. We would like to emphasize the following:

a. Any violation on the part of the “Sons of Judea” (the Jews) will garner a response.

b. We will protect this precious homeland and the sublime fortress of this glorious religion.

We announce the death of our brother the Mujahideen who fell yesterday and ask they be considered martyrs. We do not praise anyone beyond what god knows of him.

[1]The Arabic term “Jahafil” was translated to legions.

[6] In its first proclamation, published on November 1st 2008, the group depicts itself as continuing and executing Mohammad’s wish to banish the Jews from the Arab Peninsula, the equivalent of which is Palestine. See the first proclamation in the appendix herein.

[12] The Al-Haj Sura, verse 39. According to Uri Rubin’s translation, the Koran.

Senior Researcher & Head of the Terrorism Prosecution Desk, International Institute for Counter-Terrorism (ICT), Interdisciplinary Center (IDC), Herzliya, Israel Col.(Ret.) Jonathan Fighel served in various operational and field positions in the Intelligence Gathering and Research Department of the Intelligence Corps of the IDF. Since 1999 Jonathan Fighel is a senior research scholar and Director of the Intelligence Assistance for Terrorism Prosecution Department at ICT, IDC Herzliya-Israel. He is an expert on Palestinian terror organization, counter-terrorism, and Middle East affairs. Col. Fighel holds M.A degree in Middle East Studies from Tel Aviv University and combines academic and operational experience in combating terrorism. He has extensive counter-terrorism experience, expert on the Palestinian Authority, Islamist organizations (Hamas, Islamic Jihad, Al-Qaeda) the Palestinian suicide terrorism phenomenon and funding terrorism, the use of the Internet and a tool for propaganda, recruitment fundraising, and as a radicalization catalyst regarding the “homegrown” terrorism phenomenon. He is also a member of the International Academic Counter Terrorism Community (ICTAC). A media commentator on security counter-terrorism, he has lectured in a number of universities and law enforcement agencies around the world, including the US, India, Italy, Singapore, Turkey, Australia, Spain and Germany. Col. Fighel is frequently invited for lectures and orientation courses in IDF, Israel National Police, The Border Police, Israeli Security Agency (ISA), FBI, N.Y Police, TSA, Scotland Yard, London police and NATO- COE-DAT Center of Excellence Defense Against Terrorism in Turkey. The Israeli Defense Minister appoints him as a member of academic and governmental research teams on Palestinian suicide bombers and was a consulting member of the Minister of Transportation’s advisory team.