Saif al-Adel (meaning: “Sword of Justice”) is a pseudonym for Mohammed bin Salah al-Din Zidan, an Egyptian strategist from the generation of Al-Qaeda’s founders. Zidan was in charge of security for Bin Laden, and was also the organization’s explosives expert. He was involved – among other things – in planning the attacks on the American embassies in Kenya and Tanzania in 1998. In recent years, Zidan’s location has been a mystery, though it is commonly assumed that he was under house arrest in Iran, and eventually released – according a September 2015 report.[1]

Zidan gained the reputation of a top strategist for Al-Qaeda. His writings demonstrated foresight, and focused on Al Qaeda’s plans for the future. From this perspective, the book by Zidan that this document addresses is not exceptional. The book, with the long title “Al-Qaeda – Struggle and Winds of Change – Political and Military Course”, was published in August 2015 in three volumes. The second volume deals simultaneously with both armed and non-violent uprisings, while the third volume is dedicated to guerilla warfare (as of June 2016, the book’s first volume had not yet been published). However, the author’s conclusion in the book indicates that at least one of the chapters (dealing with strategy) was already written in December 2013.

Ziden’s book demonstrates not only deep thought, historical knowledge, and political understanding, but also a comprehensive familiarity with American strategies, from the position of “know your enemy”. A large portion of the book consists of historical examples of revolutions and uprisings around the world, with the goal being to learn from past mistakes and apply the lessons learned in preparation for a sweeping uprising across the Islamic world. 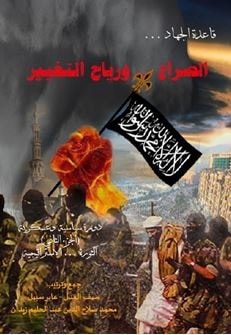 The book jacket – Bin Laden and the black flag

The second volume – “The Strategic Uprising”

This volume of the book contains five chapters with the titles: A Discourse about Revolutions, Armed People’s Uprisings, Non-Violent Uprisings, Counter Revolution, and Strategy.

In the chapter discussing revolutions, Zidan claims that members of all of the nations in the world possess an inborn trait pushing them to protest against government injustice and exploitation – though in certain cases this trait became distorted or lost its force over the years. Zidan  presents the revolution as “destruction for the purpose of building”, and places emphasis on the violent aspect that comes with it. Zidan clarifies that even if in its early stages a revolution begins with passive acts (strikes, road blockages, etc.), violent measures will have to be taken later on if any real change is sought. Still later, after the revolution has succeeded, a military-security mechanism must be set up to ensure that the accomplishments are maintained.

It’s interesting to note that Zidan claims that an anti-government uprising can be a general uprising, and not necessarily have Islamic characteristics. In such a case, when the Islamic movement succeeds in dominating the uprising which it didn’t plan, it must demonstrate an understanding of the demands that are common to the movement and the revolting people, and not try to force its own agenda upon the people. In order to encourage the people to take its side, the Islamic movement must quickly arrange Dawa activities, and replace the schools and courts with Islamic institutions.

Regarding legitimate targets for attack, Zidan makes a differentiation between security forces of the official bodies (army, police), and the “regime ruffians” (the Shabiha in Syria, or the Baltagiya in Egypt), claiming that while it is possible to influence the former and cause them to feel empathy and eventually cross the line and join the revolutionaries (particularly if they are a member of an army with compulsory conscription), the members of the second group are incorrigible and action must be taken against them with full force.

While analyzing the reasons why most of the revolutions of the 21 century in the Arabic-Islamic arena never reached a resolution, Zidan points out that there has never been a leader worthy of leading them. Zidan clarifies that the new revolution must from the start clearly define who the enemy is and who its supporters are. Furthermore, in order to deem an uprising successful, it is not enough to topple an old regime. A new regime must also be established in its wake. The achievements gained as a result of the revolution must be maintained, in order to prevent a situation where the “deep seated” institutions in the country initiate a “counter revolution” and revert the situation to what is once was – or to a situation that is even worse. Therefore, all vestiges of the old government system must be obliterated, and officials loyal to the previous army must not remain in positions of power.

In the framework of the discourse about uprisings, another concept Zidan discusses is “The People’s Uprising”. Zidan emphasizes the importance of involving the populace in the revolutionary process, and explains that a revolution can only succeed if it is powered by the people (who give it a “strategic depth”) who are not affiliated with any particular party or group. A revolution does in fact need an armed spearhead force to lead it, and to weaken the regime and all its institutions. But the people must stand behind this force and support it both financially and by joining the ranks. In this regard, Zidan cautions against external interference in the revolution – particularly by the United States – and stressed that funding can only be permitted if it comes from the general population of Islamic countries. In order to touch on every aspect of this subject, Zidan includes ten pages of discourse during which he analyzes the failed revolution in Estonia, in 1924. Later, Zidan notes that the armed insurrections are effective at the local level, while Al-Qaeda carries out operations at a regional level, and the two serve to complement each other.

Next Zidan covers the topic of civilian rebellion, and he is also convinced that this model is not applicable in Islamic countries as a means of initiating change. Zidan deduced that passive, non-violent resistance (sit-down strikes, disruption of government functioning, etc.) is not enough in order to bring about the downfall of a regime and the formation of an Islamic government. However, Zidan also dwells at length on the Iranian revolution, presenting it as a remarkable model for a non-violent uprising. Zidan uses the 2013 Egyptian military coup as an example to illustrate the concept of “counterrevolution”.

In the conclusion of the chapter on revolutions, Zidan states that one of the principle reasons for the failure of revolutions was the acceptance of a military government – when in fact it was an adversary. In order for an Islamic revolution to succeed, according to Zidan, all parties involved must give up the idea of a “fifth column” and work towards establishing a strong leadership base.

In the chapter about strategy, Zidan begins with an examination of the different definitions of that term, as determined by various researchers. Zidan quotes ancient military historians and strategists (such as Liddell Hart and Clausewitz), and discusses in detail the difference between a direct strategy, and strategies that follow an indirect approach. In addition, a large part of the chapter is devoted to discussing American strategies, about which Zidan’s expertise is impressive. It should be noted that this chapter to a great extent corresponds to a speech by Nasser al-Ansi on the topic of strategies, which was published by the “Jihad Acadamy” of Al Qaeda on the Arabian Peninsula.

In the concluding chapter, Zidan once again touches on revolutions in the Arab world. Zidan explains that the revolutions were not able to come to fruition and formulate an integrated framework of ideas that would unite all the countries which underwent revolutions. The revolutions also failed because of their spontaneous natures, and the lack of connection between them.

With regard to Al-Qaeda itself, Zidan clarified that the goal of attacking the United States is not intended only to weaken the country or to topple the government, but also to create a revolutionary ideological climate which will cause the people affiliated with the Islamic Nation to take stands against their leaders. However, Zidan does not hesitate to criticize Al-Qaeda, stating that the organization did not invest enough effort opposite the different local Islamic movements in coordinating the revolutions. Al-Qaeda should have made it clear to those groups what its plans were, and encouraged them to take part in the next uprising. This negligence on the part Al-Qaeda led to a loss of support – and in some cases even caused animosity – among the local jihad groups. In other words, Al-Qaeda was negligent in that it gave the local groups hope and assumed they would take upon themselves the responsibility for “fulfilling God’s will”.

The chapters in this volume are divided into sixteen sections, under titles that denote their contents. In many cases Zidan provides examples based on his personal experience, and his activities in the Afghan arena, in order to clarify his points. He also refers to events in his native country – Egypt.

The last two chapters in the volume deal with Al-Qaeda’s historical proclamation of jihad and the commencement of guerilla warfare against the Americans. In both chapters Zidan calls upon Third World nations, developing nations, and Islamic nations to join the revolutionary war against the United States. In that context, Zidan suggests that the September 11 attacks were a turning point which eliminated fear of the Americans, and galvanized various nations to rise up against American hegemony.

Towards the end of the volume, Zidan offers a suggestion for how to battle against the Americans, based on four axes:

In conclusion, the scope of the book and its level of detail indicate not only the author’s broad knowledge, but also his ability to make long term plans for Al Qaeda, in spite of the organization growing weak opposite ISIS in recent years. This work can be seen as a warning sign that even if Al Qaeida doesn’t have the same operational capabilities it had during its days of glory, its intention to attack the “distant enemy” – specifically the United States – is still vital and imperative.