On March 23 an online fundraising campaign was launched by Hay’at Tahrir al-Sham, an umbrella…

On March 23 an online fundraising campaign was launched by Hay’at Tahrir al-Sham, an umbrella organization composed of Salafi-jihadist rebels in Syria – including Jabhat Fateh al-Sham and Ahrar al-Sham, in order for members of the organization to purchase weapons and ammunition. The campaign was welcomed by several prominent Salafi-jihadist clerics in Syria and members of the umbrella organization, including Sheikh Abdallah al-Muhaysani, Sheikh ‘Abd al-Razzaq al-Mahdi, Sheikh Al-‘Ulayani, Sheikh Abu al-Fath and other sheikhs.[1]

Banners distributed in the framework of the campaign on the social networks Twitter, Facebook, Telegram, Whatsapp and Snapchat, in Arabic and Turkish (see photos) read: “A message to all who wish to [help] jihad with his money. The ‘Ruhama Baynahum’ Association announces the launch of the campaign, “Take part with us in victory in order to help in the battle for Hamah with his money. Anyone who wants to use his money to [help the] mujahideen should take initiative. Anyone who donates for the sake of Allah will enter Paradise”.[2]  Al- Muhaysani himself noted on his Telegram account that Abu Ahmad al-Kuwaiti, a senior commander in the organization, had donated $5,000 and that approximately $7,000 had been raised so far in the framework of the campaign. He also stated that “The way to donate is very simple: Contact @Hamah1 and take part in liberating Hamah together with the mujahideen and in their victories”. A supporter of the organization asked visitors to his Twitter account, in Turkish, to help raise money from Turkish speakers as well by spreading it in the Turkish language.[3]

The online campaign indicates the great financial distress that the organization is suffering as a result of the severe blows that it sustained in the last attack, especially against the backdrop of the cessation of support from Turkey, Qatar and other countries. Furthermore, in recent months the organization has lost a large amount of weapons as a result of battles against Assad’s army forces and Islamic State fighters. Therefore, social networks are perceived by the rebels in Syria as an important fundraising platform, hence the considerable use of them for this purpose and others. 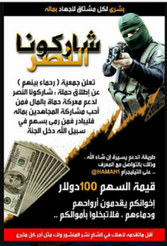 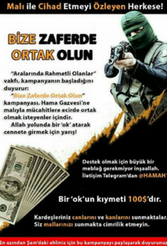