The terrorist attack that took place in the beginning of June by an Islamic State (IS) supporter of Somali origin in Melbourne, Australia, [1]proves that the Muslim community in Australia continues to be a target for incitement, whether in the public arena or on social networks, by the IS and Al-Qaeda. Only recently did Turkish authorities report that their list of terrorist operatives included 40 Australian citizens who had crossed the Turkish border to Iraq or Syria, and that from 2014-2016 there was a significant jump of 350% in the recruitment of Muslims from Australia to Islamic terrorist organizations. [2]

A reliable illustration of Islamic terrorist organizations’ efforts to recruit supporters to their ranks from around the world, including Australia, is the online monthly magazine, Yerküre (“The Globe”), which was recently identified by the Jihadi Websites Monitoring Group (JWMG). The monthly, which is associated with Al-Qaeda, is characterized by high quality graphics and began to operate for the first time in December 2016 under the Web address: https://yerkuredergisi.com.

The monthly magazine even enables readers to contact it via an email address, and its Web site has both a Facebook page (https://www.facebook.com/yerkuredergisi) and a Twitter account (https://twitter.com/yerkuredergisi). A look at the location of its activity reveals that its servers are registered in the city of Nobby Beach, in Queensland, in northeast Australia (see photo). [3] 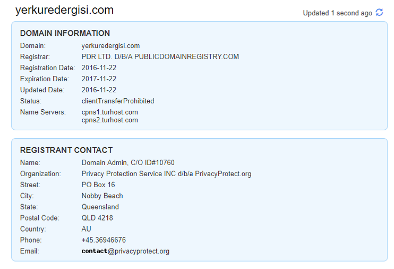 The eight issues of the magazine that were published to date included a great deal of old and new Al-Qaeda propaganda materials criticizing the West. For example, one issue included a speech by Hamza bin Laden, the son of the founder of Al-Qaeda, calling on Muslims in the West to focusing their efforts on carrying out terrorist attacks against Christians and Jews. Other content dealt with the cosmic struggle in which the Muslim world is facing the forces of darkness, led by the United States and her allies; the importance of fulfilling the commandment of jihad against the infidels and the view that it is the individual obligation of every Muslim; promoting the vision of the establishment of an Islamic Caliphate; and more.

It is interesting to note that the monthly’s target audience is Turkish-speaking Muslims. Today, close to 60,000 Muslims of Turkish origin live in Australia after migrating there mainly from Turkey and Turkish Cyprus during the 20th century. Despite their relatively small numbers in the population, they include jihadists who migrated to Syria and joined Al-Qaeda and the Islamic State. For example, it was reported that in 2014, Caner Temel, an Australian citizen who joined Al-Nusra Front, Al-Qaeda’s branch in Syria, was killed. [4] Additional incidents were noted of Australian citizens of Turkish origin joining the Islamic State in 2016. [5] 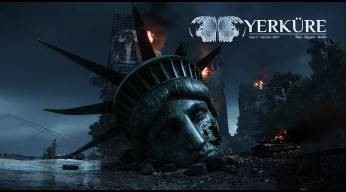 The banner pages of the monthly, Yerküre, for the months of December 2016 and June 2017

In this manner, Yerküre magazine is exploiting an online platform within Australian territory in order to disseminate incitement content. This requires that the Australian government act to immediately shut down the magazine, clarify who stands behind it and prosecute them. As long as this magazine operates freely, there is a fear of radicalization among young people in Australia.

In 2015, it was reported that an 18-year-old Australian citizen named Oliver Bridgeman from Queensland had undergone radicalization via the Internet and joined Al-Qaeda in Syria.