In my previous post, I argued that it is of major interest to know if…

The Chemical attack near Idlib, in Syria and the US missile attack on Al Shayrat airfield in Syria

In my previous post, I argued that it is of major interest to know if the murderous chemical Syrian air attack in the town of Khan Sheikhoun in Iblib province has been approved or coordinated with the Russian air-force active in Syria. The Russian position at the future deliberations at the United Nations concerning this grave incident could also give an indication on its political standing in the affair.

Russia decided to stand firmly by the Assad regime claiming, like Putin’s spokesman Dmitry Peskov did that “the Syrian army doesn’t have chemical weapons,” saying this had been “observed and confirmed by the Organization for the Prohibition of Chemical Weapons, a special UN unit.” This is a shameless lie as acccording to a report issued in August 2016 by the Organisation for Prohibition of Chemical Weapons and United Nations Joint Investigative Mechanism (JIM), mandated by the UN Security Council, the Syrian Airforce used toxic chemicals as weapons three times (https://www.un.org/apps/news/story.asp?NewsID=54795#.WOSBWoiGNPY)

Before Russian rejection of the proposed Western-backed Security Council resolution as “categorically unacceptable” the Russian deputy acting envoy to the UN, Vladimir Safronkov, urged “an impartial international investigation of the incident, stressing that the already existing documents on Syria would be sufficient to carry one out.”

Again, it ignored the fact that there was already an investigation, which took months, that proved the use of chemical weapons by the Damascus regime.

Moreover, it should be recalled that when the first UN team was sent to Syria after the 21 August 2013 chemical attack on the al-Ghoutha neighborhood were 1400 civilians were killed, the Syrian government granted the UN’s request to visit the site only on 25 August and inspectors were fired upon by regime snipers before reaching the site. The UN investigation team finally confirmed “clear and convincing evidence” of the use of sarin delivered by surface-to-surface rockets.

The Damascus regime, which wrongly understood the latest ambiguous American messages, by the President Trump himself and by the Secretary of State Tillerson hinting there is no policy to replace Assad as Syria’s leader, led the Syrian President to make the grave mistake to put at the test the United States’ resolve.

On this background, President Trump’s decision to order a barrage of cruise missiles strike against the Al Shayrat airfield in Syria, from where Assad’s chemical weapons attack originated is of upmost strategic importance.

It is not only a clear message to the Assad regime, and his allies Iran and Hezbollah, but also to President Putin and his aggressive policy in Syria and the Middle East. It impacts on the future relations between the two powers and could have major consequences for the resolution of the Syrian conflict.

It is significant that in spite of the strong verbal reaction of President Putin, who “regards the strikes as aggression against a sovereign nation” and believes the strikes were carried out “in violation of international law, and also under an invented pretext,” the Russian air defense forces armed with advanced S-300 and S-400 anti-missile missiles did not react to the massive Tomahawk attack against Al-Shayrat airfield, where Russian fighters are also stationed.

See below the map by Institute of War experts marking the  Russian and Iranian basing in Syria. 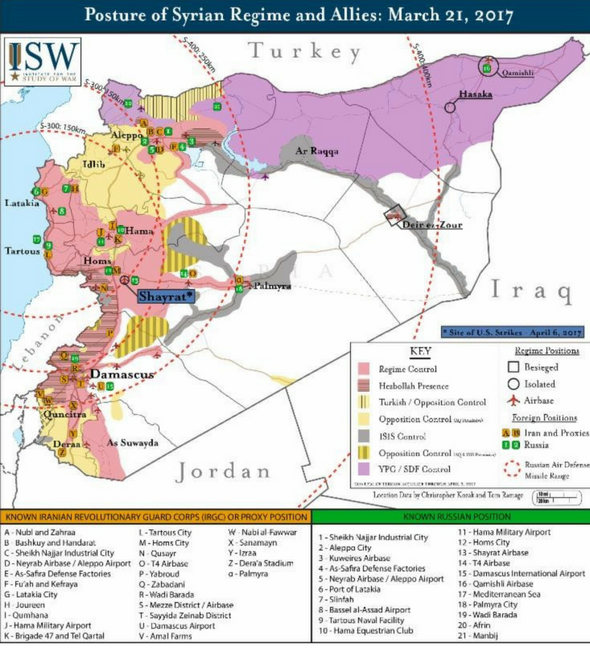