Since 1996, he served in the IDF reserves as a psychologist in fields related to terrorism.

In 2000, he completed his doctorate at Tel Aviv University on the topic: ‘Models of Schizophrenia in Animals’.

From 1996-2000, he completed a clinical internship at Tel Aviv University Psychological Services and the Shalvata Mental Health Center, and in 2006 he was certified as an instructor in psychotherapy and diagnosis.

Since 2001, he has been a staff member in the Program for Training Group Leaders at the School of Social Work, Tel-Aviv University.

In 2004, he founded the Clinical Psychology program at the Academic College of Tel-Aviv-Yaffo and headed it until 2005.

Since 2008, he has served as the Chief Professional Manager at the ‘Reut Institute of Psychotherapy’ in Tel-Aviv.

For several years, he has served as a Research Fellow at the ICT.

In 2019, he was appointed Senior Researcher and Head of the Terrorism and Psychology Desk at the ICT. 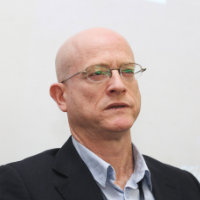 Terrorism has been studied in a variety of disciplines, such as finance, computer sciences, and international relations. At the same time, terrorism is an expression of human individual and group behavior, and therefore it is also important to analyze it using tools taken from the world of psychology – of the individual, the group and society.

The existing research on the psychology of terrorism is rich and fascinating, and deals with two areas:

The uniqueness of the new desk, headed by Dr. Shadach, is the emphasis that it places on the phenomenon of terrorism as an expression of group psychology, in which the behavior of the individual is derived from being part of a larger reference group.

The desk will combine tools and concepts from the field of group psychology, with the ICT’s expertise in the world of terrorism in order to analyze the psychological mechanisms of the individual and the group that motivate the act of terrorism.

Topics relevant to the interface between psychology and terrorism to be discussed in a series of articles for the ICT website:

An analysis of cultural elements in radical organizations, such as honor and sacrifice.

An analysis of various terrorist organizations. An analysis of the characteristics and behavior of terrorist groups against the backdrop of the origin myths of the culture from which it originated. (For example, how the Islamic State translated tribal loyalty in the Arabian Peninsula into contemporary organizational loyalty).

An analysis of leaders’ speeches to identify interactions between central group themes that influence the leader and his influence on the group.

The creation of a psychological profile of the leaders of various terrorist organizations to gain a deep understanding of their motives, decision-making methods and methods of action.

An analysis of the phenomenon of lone terrorists from the perspective of their interactions with the population from which they come (“reference group”).

The conceptualization of the phenomenon of terrorism using methods taken from the world of group psychology is intended to expand on the understanding of terrorism, and enrich the knowledge and tools currently found in the counter-terrorism toolbox.