Lt. Gen. (Ret.) Orit Adato served as Women’s Corps officer of the 36th Division (Armor Division) in the Golan Heights during Operation Peace for Galilee. Between 1988 and 1990, she served as the head of the women’s section in Camp 80 for new recruits and commander training courses.

Later, from 1990-1992, Adato served as the Women’s Corps officer of the Nahal Brigade during the period of mass immigration from the former Soviet Union and Ethiopia. In 1992, she studied at the IDF National Security College as the only woman in her class, and between 1994-1997 she served as commander of the Army 12th Corps training base for women and helped establish a forum for training base commanders.

Between 1997-2000, she was promoted to the rank of Brig. Gen. and became chief officer of the IDF Women’s Corps.

Adato has served as an ICT Associate for many years. In this framework, she has taken and continues to take part in many of the ICT’s events, lectures to diverse audiences, represents the ICT in international conferences, and participates in many think tanks in her areas of expertise. 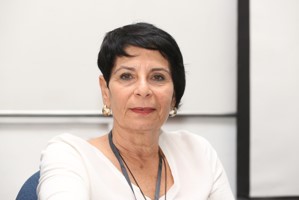 Adato maintains that the greatest danger anticipated today in prisons around the world is radicalization. Approximately 65% of the jihadist terrorists in Europe have a criminal background and some of them had even been sentenced to prison terms.

The prisoner population is vulnerable in its desire to survive the period of incarceration. Prisoners naturally seek protection and belonging, and therefore search for a connection to various power centers and gangs.  The prisoner “recruiters” know this and, in exchange for helping the prisoner during his incarceration, they expect loyalty and assistance even after he is released.

Until several years ago, Europe did not recognize the phenomenon of religious extremism and conversion to Islam within prison walls and, therefore, there was no professional intelligence system alongside police intelligence in the Prison Service. In contrast, the intelligence in the Israel Prison Service has always been very advanced, and there is frequent cooperation between it and the various intelligence agencies (such as the ISA), the IDF and the police. The wave of terrorist attacks that began in Europe several years ago, and that indicated that many of the terrorists have a criminal background, coupled with the significant development of the Islamic State and the large number of foreign fighters who joined the battle alongside the organization, led to an understanding in Europe as well that prisoners are being recruited to jihad inside the prisons.

This understanding also led the Europeans to develop closer cooperation between the police, the Prison Service and intelligence agencies. They also began to recognize the importance of professional intelligence and the establishment of intelligence bodies within prison organizations as well.

The dangers inherent in de-radicalization attempts in prison

In Israel, there is a complete separation between security prisoners and criminal prisoners, partly due to an understanding of the dangers inherent in radicalization inside prison. In Europe, on the other hand, security prisoners, such as activists in terrorist organizations or individual terrorists, are often placed together with criminal prisoners in an attempt to de-radicalize the prison. According to Adato, there is no evidence that this step leads to the de-radicalization of radical prisoners. On the contrary, this step leads to radicalization among prisoners who were not previously radical and, therefore, it is better not to take this step. However, if security and criminal prisoners are nevertheless placed together in one prison facility, she believes two important steps should be taken: One, weak prisoners vulnerable to radicalization should be placed in a separate wing. Two, the behavior of prisoners defined as radical should be closely tracked and monitored in prison. In addition, there is room to closely monitor the moods and trends among all prisoners, such as through surveillance designed to examine the trend of religious extremism: the number of prisoners taking part in classes by clerics, Friday prayers, special food orders, changes to external appearance, and more. If there is a trend towards an increase in prisoners who turn to activities of a religious nature, this indicates that some prisoners may be trying to influence and recruit activists.

How to cope with radicalization inside Israeli prisons

In Adato’s opinion, a feasible solution to reduce radicalization and indoctrination among security prisoners in Israeli jails is the division of security prisoners into three groups based on their level of danger: beginning with the most dangerous prisoners, to those who committed an act that harms security due to greed and not necessarily due to an ideological/religious motive.

How to rehabilitate individual terrorists, who are citizens of Israel and East Jerusalem, incarcerated in Israeli prisons

Adato believes that various processes should be considered in relation to individual terrorists who emerged from within the State of Israel (and not from the territories), and who are supposed to return to being citizens (or residents in the case of East Jerusalem) of the State after their release. The intention is to try and implement treatment and rehabilitation processes, especially for young terrorists who carried out their acts for personal rather than ideological/religious reasons, because they return to society and it is preferable that they undergo moderation and treatment processes prior to their release. As in any rehabilitation process, there is also room to integrate the welfare authorities in the community from which they and their families came. Only when the community feels that it is being harmed by the act of that same terrorist and pressures him to change his path can a process of genuine rehabilitation begin. This will also preserve the vital treatment continuum between the time of imprisonment and the period following release, which will increase the chances of rehabilitation and contribute to the security of the State.