Brig. Gen. (Res.) Nitzan Nuriel previously served as the Director of the Counter-Terrorism Bureau at…

Brig. Gen. (Res.) Nitzan Nuriel previously served as the Director of the Counter-Terrorism Bureau at the National Security Council. He currently serves as the deputy Commander of the Depth Corps of the IDF. He has also served as the head of Israel-US International Exercise Directorate since 2003. In this framework, he is in charge of planning and managing the military exercises, including drawing conclusions.

Nuriel has served as an associate at the ICT for several years. In this framework, he took part in many of the ICT’s events, lectured in front of various audiences, participated in simulations, gave briefings to foreign guests and officials on a political and security level, and participated in many think-tanks in his field of expertise. 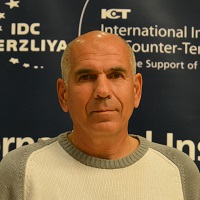 In his opinion, the greatest terrorism threat facing the world today is non-conventional terrorism as it is a very simple to produce. There are detailed explanations for preparation of these weapons on the internet and non-conventional material can be hidden inside any product, however small.

Nuriel’s outlook on counter-terrorism consists of three central views that he believes will significantly improve the ability to protect the country’s citizens, when implemented:

Regarding the current issue of the Gaza riots, he claims that the pace of events will only increase, and they will become something that people get used to. In his opinion, the State of Israel’s toolbox does not contain enough non-lethal capabilities. Only when there are such capabilities will Israel have a first-degree deterrent and the motivation to stir up riots will diminish.