On April 24, Al-Furqan jihadist media institution, which belongs to the Islamic State (IS), published…

On April 24, Al-Furqan jihadist media institution, which belongs to the Islamic State (IS), published a recorded speech by the spokesman of the organization, Abu al-Hasam al-Muhajir, on jihadist forums, social networks and various Telegram channels of IS supporters. [1] In his speech, al-Muhajir strengthened the morale of IS fighters. For example, he boasted that the soldiers of the Caliphate had caused 70 countries in the East and West to send their forces to Iraq and Syria to fight against them, and he promised that Allah, who loves his soldiers, assures them victory over the enemies of Islam. In addition, al-Muhajir vowed that the IS would continue its series of terrorist attacks and its battle against the West and its allies.

Al-Muhajir repeatedly praised the battle by IS fighters in the various arenas of jihad, including Iraq, Syria, Yemen, Afghanistan, Sinai, Libya, West Africa, Somalia, the Philippines and Tunisia, and praised their determination to defend Islam and Muslims as well as their ambition to spread the word of God. He emphasized that the Islamic Caliphate is a source of pride for Muslims and casts fear on the infidels. According to him, since the declaration of the establishment of the Caliphate, it has declared its aim of jihad and battle for Allah’s sake, and since then it has sowed fear on mankind. For this reason, “the tyrants of the East and the West gathered against it and the nations fought against it.” According to him, the battle against the infidels is a duty that will entitle the organization’s fighters to a good reward in the world to come and will rid them of the pains of Judgement Day. Moreover, Allah will grant victory to the soldiers of the Caliphate in the near future.

Al-Mhajir mocked US attempts to destroy the IS, noting that the US is now exhausted and tired of the campaign against the organization’s fighters. Moreover, he claimed that many Muslims continue to swear allegiance to the IS Caliphate and are helping it. Al-Muhajir also mocked the US air strike in Syria against the Syrian regime’s chemical gas facilities and emphasized that this action did not cover up or atone for US crimes against the Sunnis. In addition, he accused the US of handing over Sunni territories in Iraq and Syria to Iran, which is aided by Hezbollah and the Shi’ite militias to purge Syrian and Iraqi territory of a Sunni presence. Al-Muhajir even referred to the growing tension between Russia and the US, and claimed that in order to blur Russia’s alleged success in defending the Syrian regime, Donald Trump declared Jerusalem the capital of the Jewish State. With this statement, Al-Muhajir claimed, Trump wanted to draw the world’s attention to the United States.

In this context, al-Muhajir promised that the IS intends to liberate Palestine as circumstances allow for it when its fighters succeed in defeating the enemies. In addition, al-Muhajir called on his supporters to attack Jews everywhere they are. Al-Muhajir called on the organization’s supporters to continue to carry out ramming and stabbing attacks in the West, including in Paris, London, Manhattan and other cities. According to him, the battle against the American, Russian and European Crusaders is no different that the battle against the allies of the tyrant Muslim regimes, including Saudi Arabia, Egypt, Iran, the Palestinian Authority and Hamas, and he encouraged its continuation. He explained, “So every fighter of the Caliphate State will know that it will continue to keep its promise against its enemies, our swords have not jumped back, the wars have only begun”. Al-Muhajir called on IS supporters to focus specifically on Russia and Iran: “Soldiers of the Caliphate and their supporters everywhere, know that we are experiencing a new phase and a sharp turn in the path of jihad. A fanatic enemy seeks to take control of Muslim lands and to inherit what the United States left after the mujahideen exhausted it with attacks and struggles that lasted about two decades. It began to retreat beyond recognition when its allies renounced it, unable to restrain the Russians and the state of the Majus.[2] These two countries [meaning Iran and Russia] became a target for the theater of your attacks and jihad, so that that Majus and the Russians after them will experience the inferno of their tyranny and the burning of Sunni territories in Iraq and the Levant […]”.

Al-Muhajir even threatened to attack the polling centers in Iraq during the elections to Parliament, which are set to take place on May 12, 2018. According to him, Iran is winning the elections, continuing to take control of Iraq, and executing Sunni women in Iraq. In light of this, he called on his supporters to harm anyone who supports and encourages participation in the elections, whether Sunni or Shi’ite, and to attack infrastructure and security sites.

Al-Muhajir’s speech, therefore, contains instructions and guidance for the IS fighters on what objectives to focus on. In his view, jihad must be continued against the enemies of Islam with an emphasis on striking Iranian and Russian targets, as well as the election centers in Iraq, in light of the spreading Shi’ite control in the Sunni region of Iran that is supported by the West. It should be noted that al-Muhajir’s speech is the second official statement by the IS leadership since the fall of the Islamic Caliphate in June 2017. The first public statement was made in September 2017 with the speech of Abu Bakr al-Baghdadi, the leader of the organization. In general, according to the IS leadership and the Arabic-language periodical, Al-Naba, which is published by the organization, the Islamic Caliphate continues to exist and should not be eulogized. 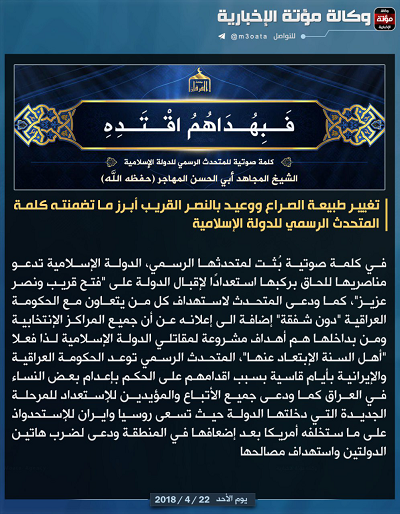 The banner that was published by the “Muta news agency”, which supports the IS, containing the gist of al-Muhajir’s messages: a call to continue jihad activities against the enemies since victory is near; a call to attack election centers in Iraq; a call to attack Iranian and Russian interests and targets due to the involvement of those countries in Syria and Iraq.

[2] A derogatory term for Persians and Iran