Iran and its proxies in Syria don’t hide their intention to partake in a future campaign against Israel that will lead to the liberation of the Golan Heights. The most recent reminder to that was given on June 9th, 2021 in a conference held the presidential palace in Tehran to benefit the launch of the book “the Strategic Importance of the Golan Heights in Terms of Israel’s Security and Survivability”. The book was written in Arabic by the Shiite militia al-Nujaba which operates in Iraq and Syria. Indeed, the conference is a form of a psychological warfare against Israel, but it also points to the importance Iran attributes to al-Nujba’a as an auxiliary force in a future war for the Golan Heights.

Al-Nujaba, led by Akram al-Ka’abi, was formed in 2013 in Iraq. It partook in the fighting against the coalition forces in Iraq, led by the US, and against ISIS. In recent years it has started to operate in Syria in the service of the Assad regime, to clear Syria from ISIs presence and the rebel organizations and assist with a future war with Israel. The organization has strong ties with IRGC’s al-Quds Force and Hezbollah’s Nasrallah. Al-Qaabi has expressed more than once his organization’s willingness to fight alongside Hezbollah in case of an Israeli aggression and assist the Syrian regime with liberating the Golan Heights from the Israeli occupation. On March 2017 the organization assisted with formation of the Brigade for the Liberation of the Golan (BLG) which meant to assist the Syrian army in liberating the Golan and other areas[1].

The timing of the launch of the above book symbolically fell on the day on which Israel took the Golan Heights. It was organized by the political chamber of al-Nujaba in Iran, the Committee for Support of the Palestinians in the Diwan Presidency of Iran and the Abna al-Rasul for Culture and Arts think tank. It was attended by representative of the Iranian regime such as the ayatollah Muhammad Hassan Akhtari, the president’s advisor; Brig. Gen. Dr. Dahkan, advisor to the Supreme Commander of the Armed Forces for Military Industries Affairs, representatives of the Syrian regime such as Shafiq Dayoub, the Syrian ambassador to Iran and Palestinian representatives such as Khaled Qadumi, Hamas’ representative in Iran and Nasser Abu Sharif, PIJ’s representative in Iran. During the conference the attendees stressed their commitment to act and repatriate the Golan Heights back into Syrian hands and the Israeli coastal cities vulnerabilities without Israeli control of the Golan Heights[2].

It should be noted, in proximity to the conference al-Nujaba posted two clips with Hebrew captions regarding its commitment to partake in a future campaign for the Golan Heights[3]. Its official spokesman, Nasser al-Shamri, lengthily told Hezbollah’s al-Ahad magazine that al-Nujaba’s Golan liberation brigade is ready to deploy and liberate the region together with the Syrian forces. Per him, the Golan liberation brigade is comprised of elite fighters that have underwent advanced military training and possess the right weapons that can reach not only the Golan but deep into Israel[4].

The al-Nujaba threat may be viewed as an extension of the Nasrallah’ speech on the heels of the Operation Guardian of the Walls regarding the need to create a new equation according to which Hezbollah will respond if Israel will hurt the sanctity of Jerusalem and its Muslim inhabitants. Al-Shamri mentioned in this context that such a response may come from any territory: “what I have learned from the statement of the resistance’ leader is that the response to any aggression against Jerusalem and its inhabitants doesn’t have to be limited to the occupied Palestine but rather it must occur on all resistance axis geographies and aim at everything the resistance axis and its weapons can reach, including the Zionist government’s interests, the US and its mercenaries in the region, to make the deterrence stronger and more encompassing. By that we will be an example for the prophet (may he rest in peace) said: we are like one body”.[5]

The conference in Tehran and the threats regarding the Golan are psychological warfare that meant to send the Israeli leadership a message saying that in the next round of escalation Israel will have to contend with all the resistance axis fronts, i.e. Syria, Lebanon, Iraq, Yemen, and Gaza. It should be noted, during Operation Guardian of the Walls, al-Nujaba stated that it would assist the Palestinians in the campaign for Jerusalem but didn’t take any action and was satisfied with psychological warfare. Yet, one shouldn’t discount their readiness and motivation as well as the Iranian assistance it received to prepare for a future activity in the Golan Heights. 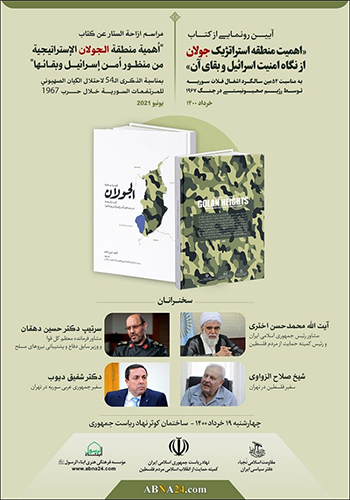 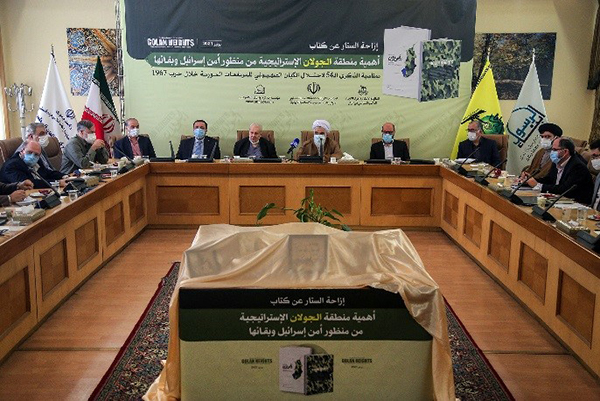 The book launch conference in Iran on the Golan Heights[7] 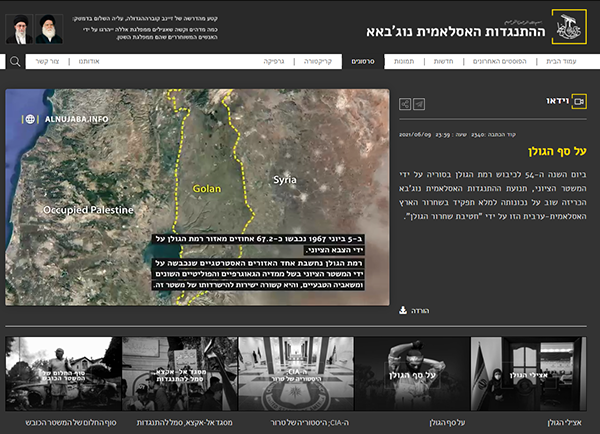