Brigadier General (Res.) Gal Hirsch is an active Brigadier General in the Israeli Defense Forces and the Former Deputy Commander (Active Reserve) of the IDF’s Depth Command, as well as the Founder and CEO D.G.Agility-Concept Ltd. He has served in various commanding positions in Anti-Terror, Commando and paratroopers units and is experienced within the fields of Counter Terrorism, Counter Insurgency and Guerilla warfare.

BG Hirsch Commanded the 91st division, responsible for Israel’s northern border, (2005-2007). He commanded the IDF’s Officers Academy (2003-2005). Served as Chief of Operations at IDF’s Central Command (J-3), and led all IDF’s counter- terror activities during that turbulent period (1997-2003). He was badly injured by terrorists ambush while serving as Chief of operations of Central Combat Regional Division (G-3), recovered 12 month in hospital and returned to command the Regional, multi forces (Benjamin) Brigade.

Before that he served as Commander of the Elite Air Force Unit “Shaldag”-“Kingfisher” (1993-1996). During 1982-1994 he served as NCO and a Fighting Trooper within the Paratroopers Reconnaissance Unit, in which he had also various commanding roles (1984-1993), includes platoon leader, company commander and paratrooper’s battalion commander. He graduated from Bar-Ilan University, receiving a BA in Mid-Eastern studies (with honors), and holds an MBA from Tel Aviv University. 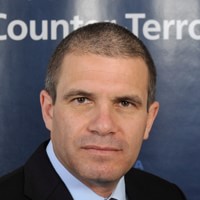