While the eyes of the world focus on Iraq and Syria to monitor the coalition forces’ progress against the Islamic State in Mosul and Al-Raqqa, the biggest democratic nation in Africa, Nigeria, records a military victory over a radical Islamic organization named Boko Haram.

The picture below, showing the Nigerian head of state receiving (on 31.12.2016) the organization’s flag taken from the last and most important stronghold “Camp Zero” in Sambisa forest, symbolizes the military defeat of the group. The flag was given by the commander of the Lafiya Dole Operation, Maj. Gen. Lucky Irabor, and by the Chief of Army Staff, Lt. Gen. Tukur Buratai. 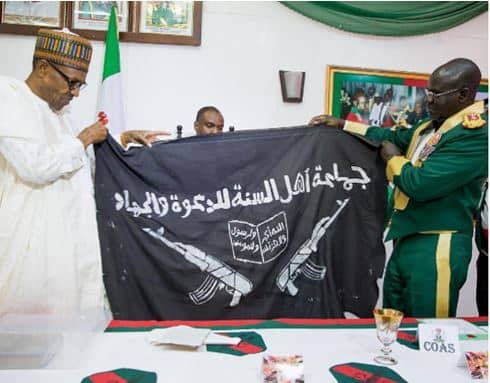 This article will not deal with the reasons that brought about the change in military thinking against Boko Haram. It is also important to note that there are many reasons for the final victory.  Despite this, it is too early, in my opinion, to declare a full victory and celebrate; much work in the field of deradicalization (CVE – Countering Violent Extremism, steps which are complimentary to the counter-insurgency operations) is to be done in order to eradicate Boko Haram’s influence. There is no doubt that Boko Haram has collapsed both physically and militarily, but still the Hydra has many heads that spread in the northeast of the country, in Cameroon and around Lake Chad. It can be assumed that Boko Harm, as a military challenge, does not exist anymore. The group lost all of its huge territories and thousands of its combatants. The remainder of the group is hiding amongst the populace. The different factions of the group are still trying to terrorize the civilians by initiating suicide bombing attacks and installing IED’s along the routes.

It is believed that Boko Haram, since the Nigerian army offensive started at the beginning 2016, has split into many factions:

1) Abubakar Shekau, the leader – on the run, last seen in the area of Kala Balge with some of his fighters.

2) Abou Moussab El-Barnawi, son of the spiritual leader and founder of the group, Muhammed Yusuf, was appointed by the Islamic State as the new leader of their West African branch on August 3, 2016. The appointment was reported in the 41st issue of the organization’s newspaper al-Naba. El-Barnawi usually operates around Lake Chad.

4) Ansaru – Ansaru announced its existence in January 2012, led by Khalid Al-Barnawi. Khalid Al-Barnawi opposed Shekau’s focus on killing Muslims and tended to target western objectives. Al-Barnawi was captured by the army at the beginning of April 2016. It is most likely that Abubakar Adam Kambar replaced him as head of the group.

This division within Boko Haram indicates that the group has lost its centralized structure; each faction operates when possible and occasionally. Reports from the ground indicate that the remaining members of Boko Haram are running away, looking for food and water for personal survival; they hide amongst the population around Lake Chad and the Cameroonian border. In fact, they are chased by the Nigerian army, specifically by the Multinational Joint Task Force (MNTJF) and by the volunteer vigilantes dubbed “Civilian JTF” who have risen up to protect their local communities from the jihadists. The key to the vigilantes’ success is that they know who is and is not Boko Haram in their individual neighborhoods.

Storming “Camp Zero” raised the morale amongst the Nigerian army. Two main roads were reopened to the public: 1) Maiduguri- Bama; 2) Maiduguri- Damasak. It is a significant sign for the Nigerian people that the Federal Government now controls the entire country, given the fact that the northeastern part of the country is back in their control. In addition to security operations, the army, along with Cameroonian support, began Operation Gama Aiki aimed at hunting the remainders of Boko Haram around Lake Chad (more than 400 small islands covered with high and green vegetation) which easily enables hiding of the insurgents from drones and aircrafts.

Military victory over radical Islamic groups is good news.  The world is expecting such news from another arena – which seems to be more difficult to deal with.  Worldwide experts in anti-terrorism need to learn from Nigeria despite the fact that this is a torn country. Nigeria has shown the world that it can overcome the insurgency by proving their determination and perseverance despite the differences and challenges that Nigeria faces in numerous fields.