On October 1, 2017, at 10:08pm Las Vegas time, Stephen Paddock, 64, opened fire on 22,000 people at the annual Route 91 Harvest Festival in the city. Paddock positioned himself in Room 135 on the 32nd floor of the Mandolay Bay Hotel, broke two windows, and opened fire indiscriminately with several automatic weapons on the large crowd that had arrived for a music concert no more than 400 meters away. As a result of the shooting, 58 people were killed and over 500 were injured. After approximately 45 minutes, local SWAT forces broke into his room and found him dead from a self-inflicted gunshot. While law enforcement authorities denied a link to any international terrorist organization, the Islamic State claimed responsibility for the attack and even gave Paddock an Islamic name as is customary among converts to Islam. Nevertheless, no evidence has yet been found to substantiate the organization’s claim. The claim of responsibility by the Islamic State

At the same time as the organization’s claims and law enforcement’s denials, Islamic State activists and loyalists began to exploit the event and its results as a platform for making threats against the West in general, and against the United States in particular. In this framework:

Al-Batar jihadist media institution, which is affiliated with the Islamic State, published a two-minute video in which it uses photos from the scene of the attack and from the police press conference under the heading, “A message to America and its allies from the Caliphate – you are defeated.” The central message that emerges from the images, which are filled with the color red (blood), is that as long as attacks against the Islamic State continue, the organization will continue to attack its enemies around the world. It is worth noting that in the context of the Nasheed (an Islamic song) that is played in English, one can hear the voice of John the Jihadist, who was killed in a US drone strike in November 2015. 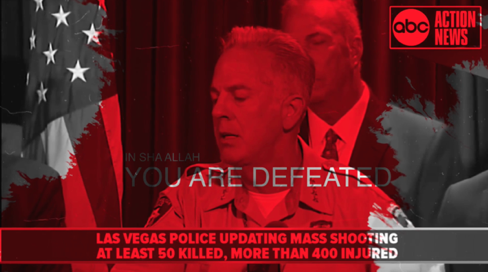 A screenshot of the video threat

On social networks such as Twitter and Google+, and on encrypted messaging programs such as Telegram, a large amount of the organization’s propaganda material was disseminated about the method of operation and its results. The purpose of the publications is to convey a message about the defeat suffered by the United States on the one hand, and to send a threat about what is to still come on the other hand. A threat of more attacks as it appeared on Telegram channels

It should be noted that at the end of the month of September, an audio clip by the leader of the organization, Abu Bakr al-Baghdadi, was published in which he calls for attacks against the western countries that are attacking the “Islamic Caliphate”. The organization’s media team linked the speech to the shooting incident in order to emphasize its intention. 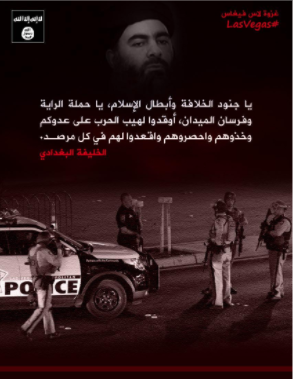 In conclusion, the above indicates that the organization is using information from the open media, integrating it with its propaganda, and encouraging its activists to draw inspiration from the success of the method of action used in the shooting attack in Las Vegas.

Researcher & Project Manager, ICT, Israel Mr. Edan Landau is in charge of the Situation Room at the International Institute for Counter-Terrorism (ICT) at the Interdisciplinary Center (IDC) in Herzliya, Israel. He also functions as a researcher in the fields of Global Jihadi Organizations such as al Qaeda and its network and Hezbollah. Mr. Landau holds an M.A. (cum laude) in Government and Homeland Security from the Lauder School of Government, Diplomacy & Strategy and a B.A. in Business Administration from the Arison School of Business, both at the Interdisciplinary Center (IDC), Herzliya in Israel. Mr. Landau previously held the position of a security officer at the Israel Airport Authority.