Senior Advisor to the President, RAND Corporation & Member of the Professional Advisory Board, ICT, United States

Mr. Brian Michael Jenkins is a senior adviser to the president of the RAND Corporation and author of numerous books, reports, and articles on terrorism-related topics, including Will Terrorists Go Nuclear? (2008, Prometheus Books). He formerly served as chair of the Political Science Department at the RAND Corporation. On the occasion of the 10-year anniversary of 9/11, Jenkins initiated a RAND effort to take stock of America’s policy reactions and give thoughtful consideration to future strategy. That effort is presented in The Long Shadow of 9/11: America’s Response to Terrorism (Brian Michael Jenkins and John Paul Godges, eds., 2011).

Commissioned in the infantry, Jenkins became a paratrooper and a captain in the Green Berets. He is a decorated combat veteran, having served in the Seventh Special Forces Group in the Dominican Republic and with the Fifth Special Forces Group in Vietnam. He returned to Vietnam as a member of the Long Range Planning Task Group and received the Department of the Army’s highest award for his service.

In 1996, President Clinton appointed Jenkins to the White House Commission on Aviation Safety and Security. From 1999 to 2000, he served as adviser to the National Commission on Terrorism and in 2000 was appointed to the U.S. Comptroller General’s Advisory Board. He is a research associate at the Mineta Transportation Institute, where he directs the continuing research on protecting surface transportation against terrorist attacks.

Paul K. Davis and Brian Michael Jenkins, Deterrence and Influence in Counterterrorism: A Component in the War on al Qaeda, RAND Corporation (MR-1619), 2002 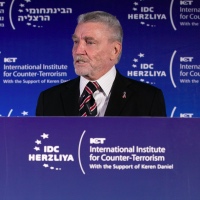