Stevie Weinberg is the Deputy Executive Director of the International Institute for Counter-Terrorism (ICT) at the Reichman University, Herzliya, Israel. He is also the Founder & Editor-in-Chief of the International Counter-Terrorism Review (ICTR), a leading publication that serves as a platform for exchanging research and policy recommendations addressing international issues pertaining to terrorism and counter-terrorism. Weinberg also serves as the President of the Youth Atlantic Treaty Association (YATA)’s Israel Chapter, which aims to empower the next generation of security leaders and foster the values embedded in the North Atlantic Treaty. At the ICT, he leads various large-scale projects for private and public customers and manages the daily operations of the ICT team.

Weinberg is the Director of the ICT’s Annual Summit on Counter-Terrorism, the World’s leading international conference in the field of Terrorism and Counter-Terrorism. He is also a Researcher for two Horizon 2020 grants, the largest research and innovation programme established by the EU. Weinberg served as the ICT lead-researcher and liaison to tech-companies; including Facebook and the Global Internet Forum to Counter-Terrorism (GIFCT), a consortium dedicated to prevent terrorists and violent extremists from exploiting digital platforms. As part of this cooperation, the ICT received two important research awards.

In addition, Weinberg is an Adjunct Lecturer at the Lauder School of Government, Diplomacy & Strategy at Reichman University, Herzliya, where he previously served as a Researcher and Teaching Assistant for various world leading experts in terrorism. As part of the Lauder School of Government, Diplomacy & Strategy, Weinberg also served as the Co-Founder and as the first Director of the Shadow Government, a program that parallels the actual government and monitors its activities, with students acting as ministers and providing policy recommendations.
Prior to his current position at the ICT, Weinberg served as the Director of Operations; Internship Coordinator & Project Manager; and Researcher at the ICT. He managed a team of 50 Israeli and international interns per year; and co-founded and first coordinated ICT’s Online Academic Programs. 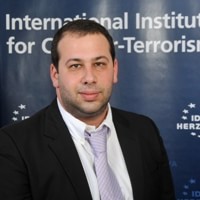