Minister Gideon Sa’ar is Israel’s Deputy Prime Minister and Minister of Justice. He is head and founder of the New Hope Party. Gideon Sa’ar was born in Tel Aviv on the second night of Chanukah, 9 December 1966, the firstborn son to Bruriah, a teacher, and Shmuel Zarechansky, a paediatrician who made Aliyah to Israel from Argentina. While in high-school, Sa’ar joined the “Techiya” Movement, and was chosen as the head of the group’s youth branch. He served in the IDF as a combat soldier in the Golani Unit, and, after suffering an injury, served as an intelligence officer in the brigade. On completing his army service, he graduated with honors with a bachelor’s degree in political science, and later a law degree from Tel Aviv University. He went on to work as an assistant to the Attorney General, and later as an assistant to the State Attorney. He then served as an attorney in the Tel Aviv District Attorney’s Office. In 1999, at the age of just 32, he was appointed Cabinet Secretary in Netanyahu’s first government, a position which he also went on to hold in the late Sharon’s first government. Sa’ar served as Cabinet Secretary in the days of the Second Intifada, and at the time of Operation Defensive Shield when Israel set out to dismantle the Palestinian terrorist infrastructure in Judea in Samaria. Sa’ar played an active part in Israel’s diplomatic efforts, and accompanied the Prime Minister on political meetings with world leaders in Israel and around the globe. Sa’arstood at the head of the Israeli delegation sent to the United Nations, tasked with preventing the establishment of an international committee, to investigate the battle against Palestinian terror groups in Jenin during Operation Defensive Shield. He chaired the committee which examined, on behalf of the Prime Minister and the Security Cabinet, the issue of Iqrit and Biram, and whose recommendations were adopted by a Cabinet decision. Sa’ar also operated in the Knesset on behalf of the Government, promoting legislation on sensitive security and political issues.

Sa’arwas elected to the 16th Knesset, in December 2002, and served as Chairman of the Likud Parliamentary Faction, and Coalition Chairman. As one of the leading voices against the Disengagement Plan from the Gaza Strip and Northern Samaria, he consistently voted against the initiative, and accordingly, refused Prime Minister Sharon’s offers of official appointments. In 2005, after the Disengagement, Sharon left the Likud, and the party suffered defeat in the elections. Sa’ar led the party in opposition, and was one of the key figures in the party’s rehabilitation and victory in the 2009 elections. Gideon Sa’ar is one of the Knesset’s most prominent legislators, with over 30 private member’s bills approved, including: extending maternity leave; changing the method of electing judges to the Supreme Court; approved absence from work due to a child’s illness; granting the court’s authority to dismiss an indictment and to acquit a defendant treated unjustly by the authorities; denial of guardianship from a parent due to acts of murder, attempted murder, or rape of a minor; prohibiting chairs of the General Union, and National Workers’ Union from simultaneously serving as Members of Knesset; proper representation of women in municipal corporations and on the boards of municipal companies; and more. In 2009, Gideon Sa’ar was appointed as Minister of Education, a position in which he served for four years. During his tenure, he also served as a member of the Security Cabinet. Sa’ar is considered one of Israel’s most outstanding and prominent education ministers. He led reforms to the post-primary education system; introduced free education for ages 3-4; established Ariel University in Samaria; led the formulation of a curriculum educating an appreciation and knowledge of the Land of Israel, including tours of Hebron and the Cave of the Patriarchs; and more. During Sa’ar’s tenure, there was an unprecedented increase in academic achievement, including in Israel’s performance in international exams and the International Science Olympiad. In September 2009, then Member of Knesset and Minister of Education Gideon Sa’ar was recognised for his integrity and performance in the political field, and for his work to strengthen the rule of law.

In 2013, Gideon Sa’ar was appointed Minister of the Interior. During his tenure, he led a determined struggle against the phenomenon of illegal infiltration across Israel’s borders. He also initiated a broad move of distributive justice, in which revenues were transferred from the regional councils to developing cities. Similarly, he led the most significant reform in five decades, in the Planning and Building Act, dubbed the “Pergola Reform”, and ordered the extension of daylight saving time – in keeping with Europe – until the end of October. Sa’ar was elected in first place in the primaries for the Likud Knesset list of candidates, in both 2008 and 2012. In September 2014, Sa’ar announced his decision to take a break from political life, and in November he resigned as a member of the government and the Knesset. During the time-out, Sa’ar delved deeper into Israel’s national security issues and served as a senior fellow at the Israel Institute for National Security Studies (INSS). In addition, he has served as a lecturer in government and reform at the Ono Academic College, and as a Special Adviser with GKH Law Firm. After around four years, Sa’ar returned to politics and was elected fourth on the Likud list for the 21st Knesset. In the run-up to the March 2020 elections, he ran in the primaries for the Likud leadership, against Prime Minister Benjamin Netanyahu. In the 23rd Knesset, he served on the Foreign Affairs and Defense Committee, the Subcommittee on Intelligence and Secret Services, and chaired a subcommittee of the Foreign Affairs and Defense Committee on Judea and Samaria. In December 2020, after more than 20 years in senior positions within the Likud, Gideon Sa’ar announced his resignation from the Knesset and the party, and established a new national movement under his leadership, the New Hope Party, which contested the 2021 Israeli elections. The party achieved 6 Knesset seats and played a crucial role in the establishment of an alternative, unity government for Israel in which Sa’ar serves as Deputy Prime Minister and Minister of Justice, and is due to become Israel’s Foreign Minister in the second half of the Government’s tenure.

​Since taking office, Minister Sa’ar has set about fulfilling a number of key electoral promises including reforms and promoting greater transparency in the criminal justice system. Gideon Sa’ar is married to Geula Even-Sa’ar, father of Daniela, Alona, David and Shira, and grandfather of Nimrod. He lives in Tel Aviv. 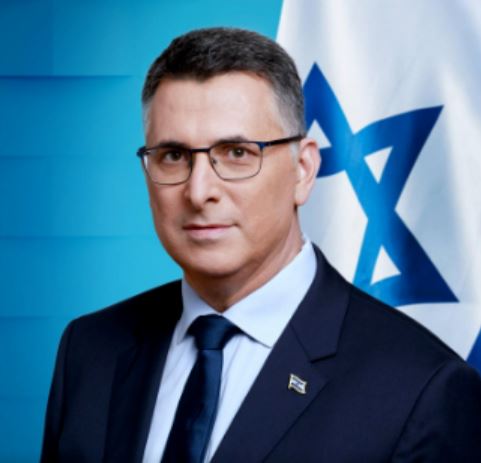