Mr. Shavit is currently the Chairman of the Board of Advisor for the ICT and served as the Director of the Mossad, Israel’s Intelligence Services, from 1989 to 1996.

Mr. Shavit held a variety of positions within the Mossad for over 32 years, until becoming head of the agency in 1989. He served in “Sayeret Matkal” – Israel’s Elite Force, and received an advanced degree from Harvard University.

After retiring from work in the security services, Shavit was the CEO of Maccabi Health Services Group for five years.

Since 2001 Shavit has been the Chairman of the Board of Directors of the International Institute for Counter Terrorism (ICT), Reichman University in Herzliya, Advisor to the Israeli National Security Council, Advisor to the Sub-Committee on intelligence of the Knesset, Committee on Foreign Affairs and National Security, Member of the N.Y.F.D. Task Force for Future Preparedness against Terrorism. He is also Chairman of Athena Human & Technology Integrated Solutions Ltd. 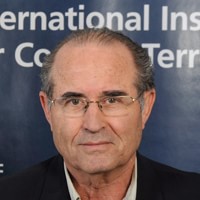