Over the last 20 years, Dr. Ranstorp has worked extensively on issues of terrorism and counterterrorism worldwide, with a special focus on Islamist extremism. His career began sharply in 1990 when a conference he co-organised at the Royal Overseas League in London was targeted by Provisional IRA, who planted a sleeper agent and one kilo of Semtex under the speaker’s podium, intending to target the UK Defence Minister (fortunately discovered). He also participated in the West European-Soviet Dialogue on Combatting Terrorism right before the fall of the Soviet regime.

Prior to CATS, Dr. Ranstorp was the Deputy and later Director of the world-renowned Centre for the Study of Terrorism and Political Violence at the University of St Andrews. Since 1994 he was largely responsible with his other colleagues for the unparalleled reputation CSTPV gained worldwide before and after 9/11.

Dr Ranstorp is internationally recognized as a leading expert on Hizballah, Hamas, Al-Qaeda and other militant Islamic movements. Dr. Ranstorp has met most of the senior leadership within both Hizballah and Hamas. His work on the behaviour of the Hizballah movement was recognized by Israeli media in March 2000 as among the contributing factors leading to the decision by the Israeli Labour government to withdraw from southern Lebanon. It was preceeded by a three-year back channel between Hizballah and the Israeli government over MIA issue.

Additionally, in 2003, Dr. Ranstorp was invited to testify before the 9-11 Commission in its first hearing. Both before and after 9/11, he was a consultant on terrorism issues with CNN and its investigative unit. Recognizing that the intelligence system was ‘blinking red’ before 9/11, Dr. Ranstorp joined CNN in preparing a documentary from the Middle East region in the summer of 2001 entitled ‘One Day Soon’ – that day arrived sooner than anyone expected. 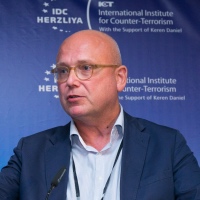