Before this, Paul was Commander of the Directorate of Professional Standards and Recognition in the Metropolitan Police Service, where he led a team of around 400 people.Paul originally joined policing as a cadet aged 15 and served as a Special Constable with Thames Valley Police before becoming a substantive constable in 1999.

Asst. Comm. Paul Betts transferred as a Detective Constable to Sussex Police in 2004, working in the busy area of Brighton and Hove. He progressed through the ranks to Inspector, undertaking roles in critical incident command and running the Local Support Team. During this time, as a PSU Inspector and Public Order and Public Safety (POPS) Bronze Commander, Paul was deployed on mutual aid to major events and serious disorder in Sussex and London, including the disorder in London in the summer of 2011.

In the superintending ranks, Paul became a POPS Gold Commander, as well as a Strategic Firearms Commander. He was the Head of Corporate Development, before working on a change programme which redesigned local policing in Sussex. Paul was subsequently selected to be the Head of Transformation for both Sussex and Surrey Police, as a Chief Superintendent, and later moved into leading the ForceControl Room for Sussex. After completing the Strategic Command Course, Paul returned to Sussex where he took over the role of Temporary Assistant Chief Constable for Operations for Surrey and Sussex Police.

In June 2020 Paul was promoted to the rank ofCommander transferring to the Metropolitan Police Service. 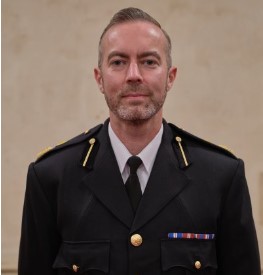