Lieutenant Colonel (Res.) Avi kalo, is an Associate at the International Institute for Counter-Terrorism (ICT), Reichman University, Herzliya. He has retired recently from the IDF after almost 25 years at the core of collection, operation and Analysis hub at the Israeli Intelligence Community in numerous management and command positions. Adv. Kalo is a Legal Counter-terrorism expert and negotiation and Crisis Management specialist with over 15 years of experience at consulting in Conflict resolution.

In his late position as Head of MIA (Missing in Action) Department at the IDF intelligence branch, Ltc. (res.) Kalo was initiating and leading the Historic, highly complicated Operation to locate and repatriate the remains of SSG Zachary Baumel, Missing IDF soldier from the First Lebanon war (1982).

Due to his skills and unique knowledge, Adv. Kalo was heading National negotiating MIA Team vis-à-vis Hamas, working closely as Deputy to PM’s Coordinator for MIA. Also, Adv. Kalo was acting as Legal Pivot at this sensitive Campaign in Israel and abroad. Prior, Adv. Kalo was involved in numerous successful high-profile hostage negotiations (2000-2008) confronting Hizbullah.

Adv. Kalo holds knowledge and practical know-how in International Law, due to his service as Legal Advisor to the IDF Southern Command and to the Military Intelligence Branch. He is a former Member at prestigious International Law Department at the IDF Military Judge Advocate Command (JAG). as such, Adv. Kalo has set the methodology and practice legal Advising at warfare practices  during Operation “Cast Lead” (2009) in Gaza, for the first time at IDF history. In addition, he is one of the pioneers in establishing Multi-national Counter-Terrorism Law apparatus, in collaboration with relevant agencies at the U.S and Europe and holds vast legal experience and practice with regard to public international law, specified at regional border agreements and security arrangements, including at the Palestinian arena. 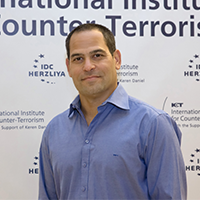