Yoel Hasson is an Associate at the International Institute for Counter-Terrorism (ICT),Reichman University, Herzliya. Mr. Hasson served as Knesset member between 2006-2013. Between 1998 and 2001 Mr. Hasson served as head of the national leadership of the Betar Youth Movement and from 2001–2003 served as chairman of the Council of Youth Movements in Israel. From 2001–2005, he served as advisor to Prime Minister Ariel Sharon on Public Inquiries, and from 2004-2005, as president of the 35th Zionist Congress. He has been serving as director general of Hatnua Party since March 2013.

In 2005, Mr. Hasson resigned from the Likud movement and joined “Kadima” upon its establishment, serving as the chair of the Kadima Young People and Youth Headquarters.  In 2006, he was elected for his maiden term to the 17th Knesset and served as chairman of the coalition and chairman of the Kadima parliamentary group. In addition, MK Hasson was a member of the Knesset Committee; the Foreign Affairs and Defense Committee; the Finance Committee; the Economic Affairs Committee; the Education, Culture and Sports Committee and other committees. Similarly, he chaired the Lobby for the Advancement of Young People in Israel, the Lobby for the Protection of Animals and the Lobby for Encouraging Immigration from the West.

Mr. Hasson was elected to the 18th Knesset in 2009, on the Kadima slate and until 2011 served as Chair of the State Control Committee.  In addition he was a member of the House Committee, the Economic Affairs Committee and the Subcommittee on International Security, Relations, and Trade.  He also founded the Lobby for the Two-State Solution and Resolving the Israeli-Arab Conflict.  Moreover, MK Hasson chaired the Lobby for Job Integration in the Haredi Community, the Lobby for the Promotion of Football in Israel, the Lobby for Encouraging Immigration from the West and the Lobby for Water Security.

With the approach of the elections for the 19th Knesset, MK Hasson joined the Hatnua party headed by Tzipi Livni; however, he was not elected to the Knesset on the Kadima slate. Following his resignation from the Knesset, he founded the “Etica” consulting company, which provides consulting services for audited entities as to how to conduct themselves in interactions with the State Comptroller, and later on co-founded the “Cabinet” consulting company, which assisted its clients in their interactions with government entities. 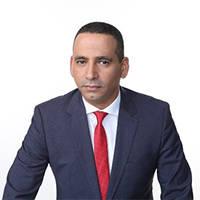