Fellow at the International Institute for Counter-Terrorism (ICT),Reichman University, Herzliya

Ambassador Uri Gutman teaches a course on “Economic and Innovation Diplomacy and the Trade Wars” at Reichman University, Herzliya. In addition, he is an Associate at the International Institute for Counter Terrorism – ICT, and a consultant to Israeli companies that wish to enter South Korea or East Asian markets.

Ambassador Uri Gutman was a career diplomat between 1989 and 2019, specializing in Middle East, East Asia and Economic affairs. He served as Ambassador to South Korea, Consul General in Shanghai and Head of the Economic and Culture Office in Taipei. Earlier in his career, he served as Deputy Head of Mission in Stockholm and in Istanbul.

While in Israel, Ambassador Gutman headed the Policy Planning Bureau at the Ministry (2016-2019). Prior to this he was the Director of Israel’s US Consulates Department (2010-2013), Director of Israel’s successful accession process to the OECD (2008-2010), Director of the Egypt Department (2002-2005) and initiated and headed the People-to-People activities with the Palestinians and the Arab World (1995-1997), within the Culture and Science Division in the Ministry.

Ambassador Gutman specializes in Middle East Politics, holds an MA from Hebrew University and speaks Arabic. His more recent experience is in East Asia and International Economics. Over his years in the Foreign Ministry, he initiated and brought to completion the first economic agreement between Israel and Turkey (1993), the first R&D agreement with Jiangsu Province, China (2008) and the Free Trade Agreement with South Korea (2021).

Ambassador Gutman was born and raised in Jerusalem. He did his military service as an officer in an Elite Combat Unit (1977-1981). He also participated in the IDF’s Brigadier-General Course (2017-2018). 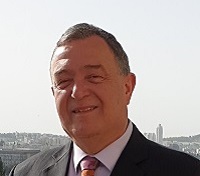