He holds a B.A. in English and French Culture from the Hebrew University in Jerusalem (1964), a Licence in International Relations from the Institut d’Etudes Politiques and a Licence in Bantu languages from the Ecole de Langues Orientales, in Paris (1969). He earned his M.A. and Ph.D. in Political Science from Haifa University (1996).

Visiting fellow (2002) at The Washington Institute for Near East Policy, which published his policy memorandum Fight on All Fronts? Hizballah, the War on Terror, and the War in Iraq (December 2003).

Has been 2008 Fellow at the Proteus Management Group (PMG), a think tank focusing on future scenarios at the Center for Strategic Leadership, U.S. Army War College, Carlisle, PA.

Member of the General Assembly of the International Institute for Security and Cooperation, Sofia, Bulgaria.

Member of the Scientific Committee of the Master in Security Analysis & Intelligence Studies at Istituto UNINTESS, Mantova, Italy.

Dr. Ely Karmon was member of the Atlantic Forum of Israel and involved in NATO workshops on terrorism and on the Mediterranean Dialogue.

Served as advisor to the Israeli Ministry of Defense and the Anti-Semitism Monitoring Forum of the Israeli Government Secretariat.

His book Coalitions between Terrorist Organizations: Revolutionaries, Nationalists, and Islamists was published in 2005 by Brill Academic Publishers (Leiden and Boston). The Center for Strategic Leadership, U.S. Army War College, published his monograph, Iran–Syria-Hizballah–Hamas: A Coalition against Nature. Why does it Work? (2008). 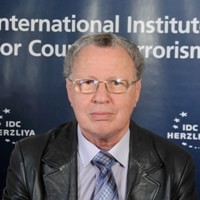