In the years 2007-2009 he was the deputy head of the National Security Council (NSC) of Israel.

Dr. Shay holds M.A and Phd degrees from the Bar Ilan University and he is a lecturer in Reichman University.

Shaul Shay is a senior research fellow of the International Institute for Counter-Terrorism (ICT) at Reichman University, Israel.

Dr Shay is the author and the editor of 19 books, 11 of them were published in the USA and U.K. His last books are: 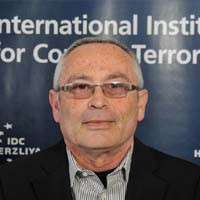