Brig. Gen. (ret.) Ariella Ben Avraham is a Fellow at the International Institute for Counter-Terrorism (ICT) at Reichman University, Herzliya.  Ariella has served in the Israeli Defense Forces for 32 years and retired at the rank of Brigadier General.

She has held a number of senior positions, many of which were in the Spokesperson’s Unit, among them the deputy of the IDF Spokesperson and the head of the communications department, in charge of strategy, branding, global and Israeli media, campaigns etc.

The last position Ariella held was the Israeli State Chief Censor, in charge of balancing between Israel’s national security on the one hand and the freedom of speech on the other hand.

Ariella is currently working at NSO group as the global communications executive. 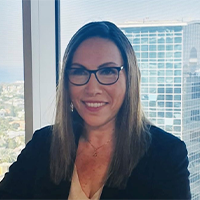