Asst. Comm. Neil Basu is the Assistant Commissioner for Specialist Operations (ACSO) in the Metropolitan Police Service (MPS) and the national lead for Counter Terrorism (CT) policing; a position he has held since March 2018. Prior to this he was the UK Senior National Co-ordinator for Counter Terrorism and led on the policing contribution to the Government’s CONTEST strategy for Pursue and Prevent. Neil has been at the forefront of Counter Terrorism policing during an unprecedented shift in threat and has led the national policing response to the five terrorist attacks and disrupted attack plots since March 2017. Neil has been instrumental in strengthening police capability, an increasing join-up with community policing, closer working with intelligence partners and an increase in preventative interventions to counter radicalisation.

Further Information:
Neil joined the MPS in 1992 having completed a BA (Hons) degree in Economics at Nottingham University, and three years working in the private sector (Banking and Sales Management).

He is a career detective having served in every rank from TDC to Detective Superintendent in Territorial Policing (Battersea, Brixton, Streatham, Merton); Anti-Corruption as a DI and DCI with CIB3 2000-2002; as a DCI and SIO with Trident Homicide 2003-2006 (where he dealt with 17 Cat A murders including the conviction of a double murderer that gained Trident’s first 40 year sentence without parole). In 2006 he transferred to Serious and Organised Crime as the lead for Turkish, Vietnamese and Chinese Organised Crime and performed the role of Kidnap and Extortion Commander. From 2008-2009 he was staff officer to Commissioner Sir Paul Stephenson, and in April 2009 was promoted to Chief Superintendent and Borough Commander of Barnet.

In 2012 he graduated first in class from the Bramshill Strategic Command Course. Since then he has held a variety of Chief Officer roles including the Commander for South East London; Commander Armed Policing; Commander for Operations Weeting/Elveden and Tuleta (the enquiries into media and public sector corruption) and Commander Gangs and Organised Crime. He was also the national lead for Less Lethal Weapons from 2013-2016 and introduced the Taser X2 to British Policing.

In 2015 Neil was promoted to Deputy Assistant Commissioner in Specialist Operations, beginning his Counter Terrorism career as the London lead for Protection and Security. This included the Operational Command Units of Royalty and Specialist Protection, Parliamentary and Diplomatic Protection (PaDP), Aviation Policing (AP) and Protective Security Operations (PSO). In 2016 he became the SNC, and led the investigative response to the 2017 UK terrorist attacks and 14 foiled plots. In March 2018, he was appointed as ACSO. Neil has been commended 10 times during his career for bravery, leadership and detective ability, including two Commissioner’s Commendations. He was awarded the Queen’s Police Medal (QPM) for distinguished service in 2016. Neil enjoys spending time with his partner and three teenage sons, film, sport, music and motorcycling. 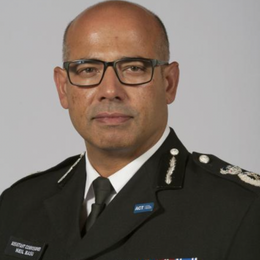