Ambassador Nancy Jamal currently holds the position of Chief of Strategic Affairs within the Ministry of Foreign Affairs, running portfolios related to Strategic Cooperation, Counter Terrorism, Extremism Prevention, Counter Terrorist Financing, Anti Money Laundering, Peace and Stability, Chemical and Biological Weapons, Disarmament and Weapons of Mass Destruction. In addition, she is mandated to overlook diplomatic security that covers safety and security of the diplomatic service; people, estates, and assets, inside the Kingdom and abroad. She also serves, by ministerial appointment as a member of the Diplomatic Corps Committee that overlooks the appointments and relocations of the entire diplomatic workforce and serves as an appointed member of the National Committee for the Prohibition of Weapons of Mass Destruction; the National Policy Committee for Counter Terrorist Financing and Anti Money Laundering; and the Foreign Minister’s Executive Council. International appointments include Executive Committee Member of the Terrorist Financing Targeting Center based in Riyadh.

She was appointed as the Official Coalition Representative ‘OCR’ in November 2018, for a one-year term that ended in December 2019. Her mandate, then, had focused on the Global Coalition’s non-military lines of effort relating to counter extremist ideology and terrorist communications, stabilization of liberated areas, counter terrorist financing and blocking movement of foreign terrorist fighters, whereby she represented the wider work of all coalition partners. Within her role as OCR, Nancy promoted the Coalition’s stabilisation efforts in vulnerable communities liberated from Daesh, and worked with partner governments, official international bodies, military, and law enforcement agencies, civil society, academics, and the media to ensure that a high level of engagement across all coalition activities were maintained and that military strategies within the conflict zone were effectually supported by partner efforts across all remaining four strands. Within her official capacity, she served as a member of the International Advisory Board for the Global Internet Forum for Counter Terrorism’s ‘GIFCT’ academic arm ‘GNET’ for a one-year term.

From 2015, Amb. Jamal had headed the international advisory board at the Counter Daesh Global Coalition Cell in London, where she led on strengthening regional partnerships, establishing international networks, and capacity building, in addition to playing a vital role in countering extremist messaging. Her duties were of a diplomatic nature. On record, she is the first Arab official to ever be seconded to the British government’s Foreign and Commonwealth Office.

Since 2013, Amb. Jamal had joined the Kingdom of Bahrain’s Ministry of Foreign Affairs as the Acting Director of Information, Studies & Research, mandated to implement a fully comprehensive communications strategy in line with the Kingdom’s foreign policy, execute the foreign ministry’s public affairs and information policy that enabled timely knowledge sharing through up-to-date studies and research, and operating a state-of-the-art press centre that embodied a variety of public communications practices. Before that, since 2010, she had held the position of Director of External Relations and Global Outreach at the Bahrain Center for Strategic, International and Energy Studies ‘DERASAT’ and was a founding member of the institution. Within this post, she had reported to the Chairman of the Board of Trustees, and Diplomatic Affairs Advisor to His Majesty the King. During this period, she became an appointed member of the National Committee delegated to the World Petroleum Council.

Amb. Jamal had previously held the position of Head of Foreign Media at the Kingdom of Bahrain’s Ministry of Information since 2006, where she played an essential role in setting and executing an outward communications strategy worldwide & was in charge of establishing & operating information offices in Washington D.C., London, Paris & Cairo. Simultaneously, Amb. Jamal held an executive position within the structure of UN Habitat’s Khalifa bin Salman Award for Urban Development and was an appointed member of the National Committee for the Prevention of Trafficking in Persons.

Nancy had started her career in 1997, in Islamic Banking, working her way through different departments at Arcapita Bank, where she focused mainly on sharia-compliant real estate portfolios, high-net-worth client investment administration, and operated the bank’s KnowYour Client (KYC) and Anti-Money Laundering (AML) policies. A Fulbright scholar, Amb. Jamal earned a Bachelor of Science in Business Administration from the University of Bahrain and obtained a Master of Arts in Public Communications from the American University in Washington D.C. with a focus on soft power politics in the Middle East. She holds a Diploma in International Law, Constitutional Law and Human Rights from the University of Bahrain and has completed executive leadership programmes at Harvard University’s Kennedy School of Government and the National University of Singapore’s Lee Kuan Yew School of Public Policy.

Nancy is a keen advocate against domestic violence and supports the understanding of Dementia, Alzheimer’s, and other mental illnesses. She eagerly promotes women’s education and has a flair for religious theology and Arab Gulf anthropology. 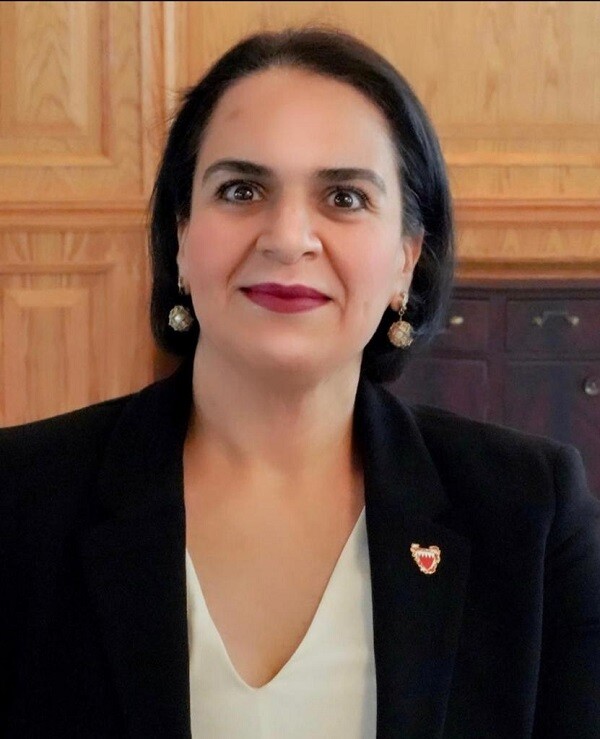